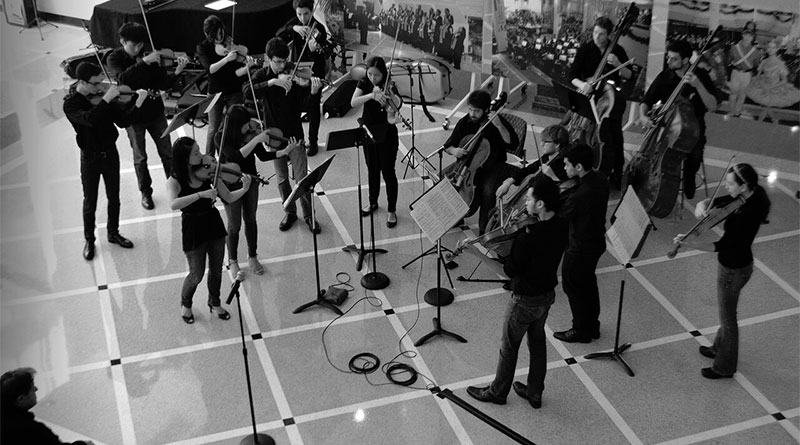 Houston, meet KINETIC, a new conductorless ensemble founded by two accomplished young musicians: New Zealand violinist Natalie Lin and Cellist Max Geissler. Lin won 6th Prize and the Audience Choice Award at the 2013 Michael Hill International Violin Competition, 4th Prize at the 2012 Klein International Strings Competition and has performed as a soloist with the New Zealand Symphony, Auckland Philharmonia and Erie Philharmonic. Geissler earned his undergraduate degree from the University of Michigan, working with Richard Aaron, and has performed as a featured soloist with several orchestras in the St. Louis area, including the Saint Louis Symphony. Both Lin and Geissler are currently pursuing doctoral studies at Rice University’s Shepherd School of Music. KINETIC launches their inaugural season with FALL PROJECT: “FANTASY“ on Oct.18, 3pm at First Evangelical Lutheran Church. A + C editor in chief Nancy Wozny visited with Lin about the ideas behind KINETIC and their first season.

What made you want to form a chamber ensemble in Houston?

This is my second time living in Houston (the first was in 2007, when I had just moved from New Zealand to begin undergraduate studies at University of Houston), and I have only grown to love this city more every day. When I decided to form a new chamber ensemble, Houston was very much a part of the vision. I wanted this ensemble to specifically reside in this city, to add to the vibrancy of the music scene here and to highlight the immense musical talent that this city fosters.

Why did you decide to go conductorless? I thought those folks were important.

The conductorless format is something that has fascinated me for many years. My first experience with it was back in high school when our music director took a sabbatical, and instead of appointing a substitute conductor for the chamber orchestra, he left me in charge. I quickly learned on the job what it took to lead and inspire a group of musicians who were also my peers, while still having my violin in hand.

From the beginning, KINETIC set out to be a conductorless ensemble – not as some afterthought, but very much as the core of what we would be about. Operating without a conductor changes the dynamics of an ensemble entirely. While there is no doubt that the conductor’s role in the traditional orchestral format is hugely important, in KINETIC, there is a very tangible shift in focus and energy because that figure does not exist. Playing together becomes chamber music: instead of relying on a baton, we rely on each other’s movements, gestures and subtle cues to stay unified. As someone who dances as a hobby, I love that movement and visual connection are such vital aspects of making music. There definitely is a risk factor when it comes to performing conductorless, but that is what makes the entire experience a thrill.

Is it more democratic to be conductorless? Are you all conducting in some way?

KINETIC is more democratic in that we give room for dialogue about the music. Rather than having one figure calling all the shots, we make sure everyone’s artistic voice is valued throughout the rehearsal process. In fact, we even factor in time for rehearsals to be chaotic – that’s all part of the thorough working out of the music. At the same time, there still is a clear leadership structure within the ensemble that helps channel all our ideas into a unified result. As leader, my role in part is to facilitate the flow of discussion and exploration, while still ensuring that decisions ultimately get made and a standard of excellence is always achieved.

You mention that your rep includes Benjamin Britten, Frank Bridge, Igor Stravinsky, Leoš Janáček and Josef Suk. What will you be playing on the October show?

Part of KINETIC’s mission is to give platform to under-represented works that we think are worth being heard. Last year, for example, our main focus in repertoire was mastering the string orchestra works of Benjamin Britten. For this upcoming concert on Oct. 18, we’ll be presenting three works by Ralph Vaughan Williams: Fantasia on a Theme of Thomas Tallis, Phantasy Quintet and Concerto Grosso. In addition, we’ll be giving the world premiere of Two Columns, a new work by award-winning, Houston-based composer Daniel Knaggs.

As you mention, your mission encompasses performing  “great and the under-represented.” Which pieces fall into that category?

As I began researching and compiling a list of works written for string orchestra, it was quickly very obvious that this repertoire extended far beyond a few celebrated standards, such as the serenades of Tchaikovsky, Dvorak and Elgar. The bulk of string orchestra pieces seldom get featured on the main stage. I already mentioned Britten, who is in my opinion one of the most innovative writers for strings, but besides his works, there are wonderful string orchestra pieces written by Schoenberg, Korngold, Mendelssohn and Bloch, to name just a few.  None of these composers are by any means obscure; their string orchestra works simply get overlooked.

You and your project manager Max Geissler are both doctoral students at Rice University’s Shepherd School of Music. How do you find time to do both?

Completing doctoral work and running KINETIC simultaneously is like having two full time jobs. However, I think I can speak for both Max and I in saying that we enjoy every aspect of what we do on a daily basis. Being a musician in general requires wearing many hats, and I consider educating and teaching about music no less a calling than performing music. That combination of education and performance is what the doctoral degree at the Shepherd School is about. Everything we work for, whether it’s in our doctoral studies or with KINETIC, is furthering the cause of music, so it’s worth doing. I also have my professors and mentors at the Shepherd School to thank for encouraging the entrepreneurial spirit in me. Their support for the vision of KINETIC has been unparalleled; without them, it would not exist.

That’s great to hear.  Houston is a classical music entrepreneurial mecca, and music is the healthiest sector of the performing arts. How have you found the scene?

I have certainly found Houston to be an exciting scene for music-making, and I believe there is still more room to grow. The fact that this city is so rapidly growing in population should be all the more reason for us artists to insist on creating more culture and more arts, to keep enriching the communities that exist here. My hope is that Houston will become a place as attractive for artists to live and work as the cities along the West and East coasts.