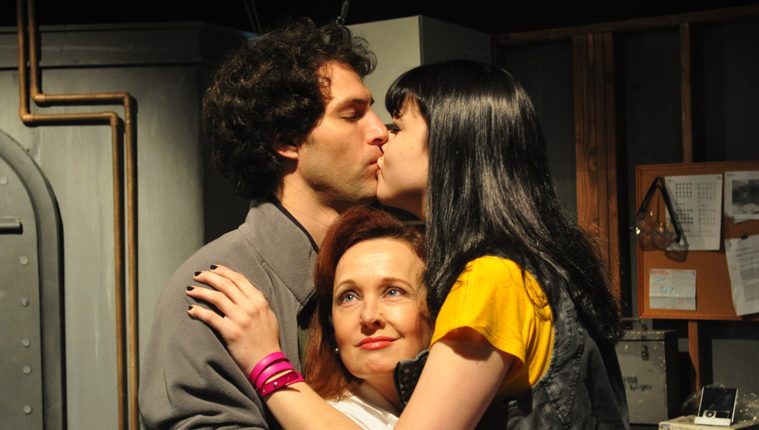 Until he fell in with a bad crowd at the theater. Within less than five years Jaffe had accepted jobs as a male model (“boring,” he declares), quit all his programs at Rice, moved to Los Angeles for two years to seek film and TV work, moved to New York to polish his stage skills, then returned to Houston and Rice to finish his degree, this time in theater. And oh yes, he launched his own theater company to produce the sort of innovative plays that fill stages, and hopefully seats, in New York, Chicago and other major U.S. cities. Jaffe named the company in honor of his dog Brandy – Black Lab.

“My idea of the perfect play? – Hmm…” he muses, a tall, lanky leading-man-looking guy sitting at his desk amid the hive of artistic activity that is Spring Street Studios. “It’s the play you can’t look away from, and you have to know every single moment what happens next.”

By the end of the new Black Lab season that launches in January, all Houston theatergoers will have a better idea of what Jaffe considers the perfect play. First up is an off-Broadway success called The Submission by Jeff Talbott, a play about a play submitted to a distinguished American theater festival. The good news is that the play is about African-Americans living in the ghetto. The bad news is that the author (allegedly one Shaleeha G’ntamobi) isn’t really a woman or African-American and barely knows where or what a ghetto is. So he hires someone who looks the part to play her at the festival, and no doubt lots of thought-provoking hilarity ensues. Black Lab does not have a stage of its own, so The Submission – with a cast of four, directed by Jaffe himself – will be performed at Frenetic Theatre.

An even bigger deal comes from Jaffe’s company in May, in the form of the surprise Broadway hit Chinglish by David Henry Wong, to be performed (appropriately enough) in the beautiful theater inside Asia Society Texas in Houston’s Museum District. This play, about the culture shock experienced by an American businessman trying to land a lucrative sign-making contract in China, presents interesting casting challenges: not least the fact that much of the script is in Mandarin with English subtitles, thus requiring five Asian actors fluent in the language. One role is even a British expat who’s lived in China for twenty years. “We actually found someone who could handle that right here in Houston,” Jaffe beams, obviously proud of his town.

Jaffe spent most of his childhood in West U, which probably felt natural considering that his mother, Amy Myers Jaffe, was a nationally recognized energy expert who taught at Rice while also serving as a fellow of the Baker Institute. His mother was from Boston, while his father, a successful attorney, was originally from Philadelphia, so a certain Northeast sensibility must have pervaded the lives of Jaffe and his younger sister. Before long, young Jordan was dreaming of being a soccer player, even as many of his buddies were dreaming about football. So yes, there was soccer; and then Asian studies. And finally, whether it was inevitable or not, there was theater.

“I guess, with my studies plus learning to speak the languages, I figured I’d be some kind of analyst for the government,” he recalls. “But then one day, before my second semester at Rice, I was walking through the Galleria and got approached by a model scout. I shot a portfolio, but I hated it. The next day at Rice I went to the theater department and said, ‘Sign me up.’”

As happens often in a college theater setting, life on, off and around the stage quickly drove away interest in all other academic disciplines. Jaffe remembers working as assistant stage manager for a department production by True West by Sam Shepard and starting the grueling process of auditioning for roles on campus and around town. It was this experience that inspired the trek to Los Angeles; he did appear in an episode of Gossip Girl, making out with somebody in a party montage, but as he simply summarizes: “LA is a very tough town.”

Switching coasts, Jaffe started classes at the Atlantic Acting School, the teaching wing of the Atlantic Theater Company. Here he was exposed to some of the best of contemporary theater – David Mamet even stopped by to talk to students one day – and became more than a little obsessed with reading new plays, pondering what they might mean and how they might be staged. Finally, growing homesick for Houston, he bundled up the mystery and meaning of all these experiences and headed south. He earned his theater degree from Rice in May 2011.

Black Lab grew out of meetings he had with one of his instructors, local actor Justin Dorn, who suggested a bit of basement space at Rice that might work as a black-box type theater. Dying City was the first show Black Lab put on, followed by Farragut North, the latter directed by Dorn. “I wasn’t even finished with the first play before I was looking for the second,” Jaffe recalls.

As the new Black Lab season gets ready to open, there are many challenges ahead, from matching productions to the taste of Houston audiences to finding funding large and small, since ticket revenues are almost never enough to pay the bills of a decently done show. Jaffe seems confident he knows where the bridges are and that his life to date has prepared him to cross each one. Most of all, for him and now for Black Lab, there’s the magic of what you can do with those words on paper.

“There’s a special type of work that I enjoy,” he says. “When I first set out, I found myself auditioning for plays I didn’t even want to do, while a lot of the plays I liked weren’t being done.” Jaffe ponders a moment, then states what by now is obvious: “I really like being able to pick the plays.”