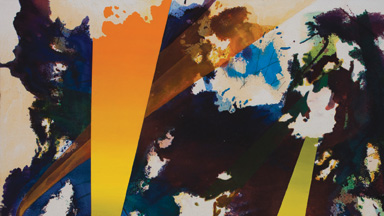 “Spectral Passage,” 2011, by Katherine Colin, was an award winner at the DMA.

A new exhibit sponsored by Dallas Architecture Forum, Our Architecture: Arts & Humanities DFW 2012, is now on display at NorthPark Center through June 17. The exhibition features 12 of Dallas and Fort Worth’s landmark museums and performing arts buildings photographed by renowned Dallas-based photographer Laura Wilson. DAF commissioned Wilson to photograph original images that celebrate Dallas/Fort Worth’s most architecturally significant cultural buildings. With the completion of the Dallas Arts District, the Dallas/Fort Worth area is now the home of 12 major cultural buildings designed by some of the world’s most outstanding architects of the 20th and 21st centuries. The current exhibit can be seen in the mall outside of Barney’s New York.

The Dallas Opera has announced the commissioning of a new original one-act opera by renowned British composer Joby Talbot (Alice’s Adventures in Wonderland and The Hitchhiker’s Guide to the Galaxy) and the critically acclaimed American librettist Gene Scheer (Moby-Dick, Cold Mountain) in their first joint project. Based on a harrowing 1996 expedition to summit the world’s tallest mountain peak, Everest will blend documented facts and contemporary recollections of the transformative journey experienced by Everest survivors, with flights of the imagination designed to keep audience members transfixed in this harshly beautiful place at the top of the world. Everest is expected to command center stage in the Margot and Bill Winspear Opera House at the AT&T Performing Arts Center in February of 2015.

Carol Robbins, The Ellen and Harry S. Parker III Curator of the Arts of the Americas and the Pacific, is retiring after 47 years of service to the Dallas Museum of Art. In appreciation of her nearly 50 years of Museum work, and of her renowned curatorial expertise in ethnographic textiles, Robbins has been appointed Curator Emerita. Highlights of Robbins’ impressive career include the nearly fifteen textile exhibitions that she has organized since 1980, in addition to a significant number of acquisitions that are extraordinary examples of their type. Of particular note was the gift in the 1970s of the Wise Collection of Ancient American Art, along with two collections of African art, that gave the Museum added significance and stature among scholars and patrons.

Original artwork by Dallas-Fort Worth artists will be on display in the soon-to-open NYLO Dallas South Side. The hotel is currently under construction at 1325 South Lamar and is set to open next month. Earlier this year, local artists submitted artworks to the NYLO Dallas South Side Art Competition, with the hope of having their pieces displayed throughout the hotel. The winning artworks have been selected, all from the vibrant arts community and all complementing the hotel’s interior design. Every NYLO hotel showcases the creativity of local artists by displaying all original artwork throughout each property. Fifty-five artists and more than 150 original artworks were selected as the winning pieces from 400 entries.

The Dallas Museum of Art recently announce the recipients of its 2012 Awards to Artists and travel grants. This year, 10 artists received awards in one of three categories: the Clare Hart DeGolyer Memorial Fund, the Arch and Anne Giles Kimbrough Fund and the Otis and Velma Davis Dozier Travel Grant. The DeGolyer and Kimbrough funds were established in 1980 to recognize exceptional talent and potential in young visual artists who show a commitment to continuing their artistic endeavors. The DeGolyer Fund is awarded to artists between 15 and 25 years of age who reside in Texas, Oklahoma, New Mexico, Arizona or Colorado, while the Kimbrough Fund is open to residents of Texas under the age of 30. Since their founding, the two funds have awarded more than $482,000 to artists. A list of all the winners can be found on this web site.

Colin Firth and Scarlett Johansson star in 2003’s Girl with a Pearl Earring, being in the summer film series at Samuel Lynne Galleries.

Samuel Lynne Galleries will host another summer film series at the expansive Dragon Street gallery. The first screening June 14 is of Waste Land, which follows renowned artist Vik Muniz as he journeys from his home base in Brooklyn to his native Brazil and the world’s largest garbage dump, Jardim Gramacho, located on the outskirts of Rio de Janeiro. There he photographs an eclectic band of “catadores” — self-designated pickers of recyclable materials. Muniz’s initial objective was to “paint” the catadores with garbage. However, his collaboration with these inspiring characters as they recreate photographic images of themselves out of garbage reveals both the dignity and despair of the catadores as they begin to re-imagine their lives. Other showings include Leonardo Live, an insightful high-definition tour of the National Gallery exhibition, Leonardo da Vinci: Painter in the Court of Milan and Colin Firth starring in the 2003 release, Girl with a Pearl Earring, the story  of a young peasant maid working in the house of painter Johannes Vermeer, who becomes the model for one of his most famous works.