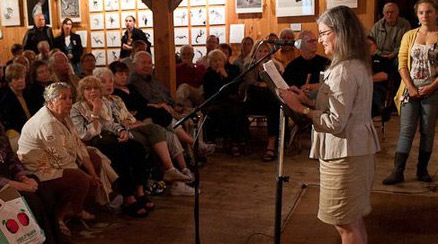 Beyond the (Arts) Writer: Nancy Wozny

A+C has a pretty eclectic and busy bunch of writers. They’re musicians and curators, architects and dancers, and even writers for other publications. We follow each of these fancy folks in their other endeavors and we think you should too! Every now and then we’ll let you know about the artsyness happening behind the scenes in an A+C writer’s world. Who better to begin with than Nancy Wozny, who steers our ship as editor extraordinaire?

You can find Nancy’s esteemed mug all over the American Dance Festival this year with the Inside Insights video series, highlighting 2012 performers and choreographers. For the series, Nancy paired up with filmmaker Steve Milligan to showcase not just the companies and performers, but the pieces they’re presenting as well as their places in today’s dance world.

In August, Nancy makes good on the July/August edition of our “Worth the Trip” series. She checks out of Houston and heads for the Berkshire Hills to take her third consecutive post as a scholar in residence at the 80th Anniversary Jacob’s Pillow Dance Festival. In March 2011, President Barack Obama presented Jacob’s Pillow Dance Festival with the National Medal of Arts, making it the first dance presenting organization to receive the United States Government’s highest arts honor.

Nancy will give pre-show talks at the festival before Trey McIntyre Project and Liz Gerring Dance Company. Nancy is also packing her pom-poms to cheer on the Houston Metropolitan Dance Company when they hit the Inside/Out stage. The Houston Met will be the second Houston company to grace the historic stage at Jacob’s Pillow. As if that’s not enough Houston dance love, The Joffrey Ballet will close out the 80th Anniversary Festival with a world premiere by Houston Ballet chief Stanton Welch.

That’s a lot of dancing with Nancy! Check in next time when we peek in on the artsy life of our other Nancy (Zastudil)!

-CANDACE KIZER
Candace is the Marketing and Social Media Manager for A+C Houston.