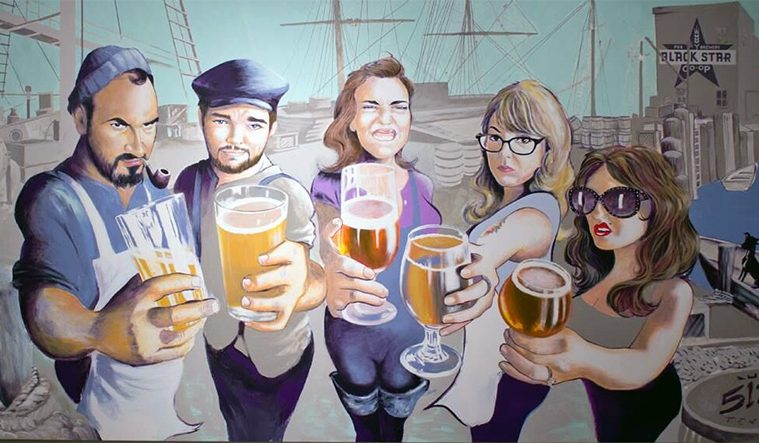 Cooking Up Something Big: Co-Lab’s Art of the Brew

The Dock Hands, Ted Cheavens in partnership with Blackstar Co-op Pub and Brewery. 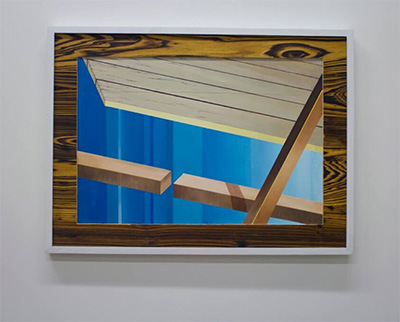 Board Painted on Board, Mark Leavens in partnership with Last Stand Brewing Company.

The Austin non-profit, Co-Lab Projects, is an incubator for more than 100 artists who often rely on collaboration to make their work.  For example, the painting duo Drew Liverman and Michael Ricioppo, who function as a unit called YOUNGSONS, had a show in May at Co-Lab’s pop-up location and created a large-scale outdoor mural.  So it makes sense that when Co-Lab founders Chris Whiteburch and Austin Nelson decided four years ago to launch Art of the Brew, a beer + art collaboration, it was instantly one of their most popular endeavors. This year’s event takes place on Sept. 3.

“It was one of the biggest Co-Lab openings we’d ever had,” says Whiteburch, “There were like 500 or 600 people out.” What started with the pairing of eight breweries and eight artists has now grown into 33 brewers and 33 artists who are tasked with creating custom art and custom brews based on their collaborations. And it keeps expanding. Nearly 800 attendees came out during the second year, and the third year drew around 1,500. The organizers expect an even larger turnout at this year’s event.

Art of the Brew is so popular due in part to the fact that it’s free and open to the public, a main goal of the founders. “We want to stay true to what Co-Lab was doing… trying to provide free programming,” says Nelson.

And to stay true to Co-Lab’s non-profit mentality, the directors recently got a non-profit designation for Art of the Brew as well, which will be under the Co-Lab umbrella. After they pay the artists and bands for the event, which features all-Texas artists and breweries, they expect to put proceeds back into Co-Lab to cover education, programming, and studio needs.

It sounds like a sweet deal for what could be a labor-intensive project. Months before the event, the breweries and artists started collaborating, which could involve anything from studio visits and brewery tours to brewing side-by-side. Artists will make their work based on those collaborative conversations about the brewers’ culture and beers, and the brewers will prep their one-off brews for the event.

The result could be anything from label art, to conceptual sculpture, to video and sound installations. “It runs the gamut,” says Whiteburch. “Maybe they’re using materials that they’ve never used before that they learned about through brewing,” says Emily Lowe, the third director of the event. “Breweries have given artists barrels to draw on or turn into thrones,” adds Nelson. 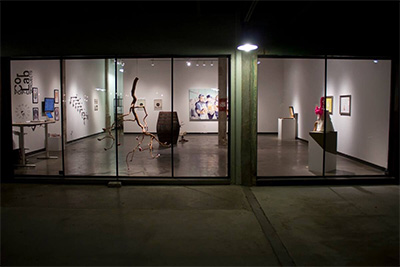 Art of the Brew 3, hosted by Co-Lab Projects Pop Up at Canopy.

And the directors are tapping into the network of collaborations already taking place between artists and breweries across the state. “There are a lot of breweries that have working relationships with artists, like Josh Cockrell with Jester King brewery [in Austin]. He not only brewed beer with them and did a lot of other in-the-trenches work that breweries need, but he also designed all of their label art, and it’s absolutely some of the best label art in the state,” says Whiteburch. “There are a lot of breweries in Dallas and Houston that have relationships with artists that show in their space. It’s amazing how intertwined these communities already are.”

“This year we added Buffalo Bayou and they have an artist-in-residence at their brewery,” adds Nelson of the Houston-based brewhouse. Buffalo Bayou offered the artist, Voltaire, a creative grant to produce work to hang in the brewery and offices, according to Tanya Kostetsky, a representative from the brewery.

The organizers say what’s great about Art of the Brew is that it gives artists the opportunity to get their names out there at a highly attended event – beer brings more traffic than art shows by themselves, and with Texas’ notoriety as one of the fastest-growing brewery markets, artists are getting more of a chance to experiment and be seen.

“Austin has an interesting situation where you have a lot of young artists who are making art and doing things that are experimental, but you don’t have a huge collectorship… and they don’t necessarily feel like there’s as many opportunities for them to show work,” says Whiteburch. “What we’re able to do here is take people that have a passion for beer and bring them into a situation where they’re exposed to contemporary art that they would normally not see,” he adds. “We can create a space for smaller galleries or more experimental spaces that’s easily approachable.”