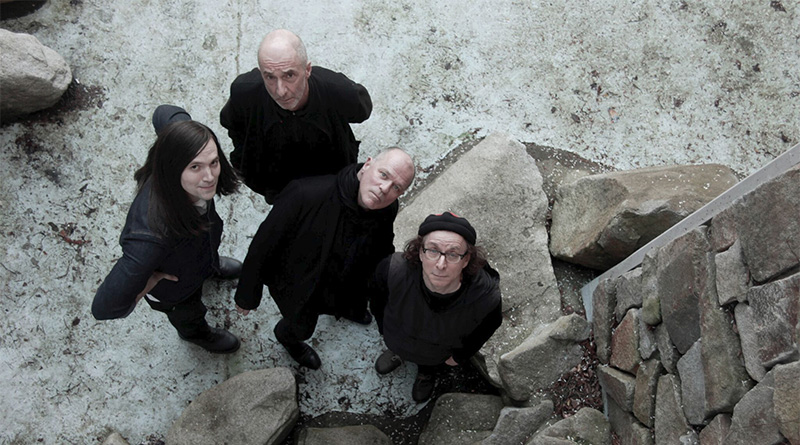 Sitting at a red light in Houston, behind a Range Rover with an “I [red cube] Marfa” (like I [heart] NY) bumper sticker, I’d say Marfa’s myth is at peak mythology.

But, what is Marfa Myths, the event that takes place from April 12-15? Looking into the spinning gif labyrinth logo on the net-art-PowerPoint-Tumblr-psychedelic-website, it is hard to tell at first. Presented by Ballroom Marfa, in partnership with Brooklyn indie label Mexican Summer, Marfa Myths (est. 2014) is a music festival, recording residency, artist residency, and multidisciplinary cultural program (which hopefully catches all other possible combinations of multi-anything anythings).

One of the things that works well in Marfa that doesn’t work in a large city is spreading shows out across different buildings. This can be a nightmare in a city that requires trekking back and forth across town to have to wait in line to see a band before trekking back to that other bar and tickets are sold out and they’re out of free beer and let’s just go home. In Marfa, everything is pretty much walkable. Programming in the different spaces equalizes the experience of the town for visitors. Although they don’t feature their own Robert Irwin, the Lost Horse Saloon and the Marfa Visitor Center are also important to the local culture.

The festival coincides with Ballroom’s spring exhibition opening. This year it’s Hyperobjects, a collaboration between philosopher Timothy Morton – a fellow Texan, who wrote a book called Hyperobjects – and Laura Copelin, executive director and curator of Ballroom Marfa. The show is a group exhibition inspired by the ideas in his book about his invented term: “the hyperobject,” which he writes, “describe[s] all kinds of things that you can study and think about and compute, but that are not so easy to see directly … not just a styrofoam cup or two, but all the styrofoam on Earth, ever.” With objects being pulled from all over the geographical community, Copelin says the exhibition further “investigates and highlights the ecological specificity and singularity of the region. It’s been interesting to work out how to put objects from the geological, botanical and anthropological records in conversation with contemporary works of art.”

Being a small town with mid-sized arts organizations equipped with reasonable resources, producing interesting programming in Marfa often involves creating partnerships with outside organizations. “Collaboration is key at Ballroom,” Copelin says. “It feels essential. We’re a small organization with big ideas and, through partnerships, we are able to expand what we do and who we are.”

Each year the festival features a recording residency that pairs two artists to record a collaborative EP. This year’s musicians-in-residence are Bradford Cox and Cate Le Bon. Myths 003, the fruits of last year’s residency with Dungen and Woods, came out on March 16. Previous Marfa Myths releases include EP’s by Connan Mockasin and Devonté Hynes, and Ariel Pink and Weyes Blood.

Jesse Moretti is this year’s visual artist-in-residence. Her work blends bright colors and 1990s PowerPoint gradients with a more structured, graphic design approach to form. Grounding the vibrant colors by in simple shapes and lines, she gently alters the geometry to disfigure the shapes, references, and expectations. It’s like if your dentist played with Ornette Coleman in the ‘70s, these would be the paintings in the waiting room.

A critical survey of research literature reveals shows people to refer to in Marfa as “vibe-y.” We are living the golden age of “vibe-y,” but the desert is “vibe-y” to people who don’t live there, so it takes a conscious effort to avoid playing into that. I think the Myths line-up does a good job of avoiding falling into the desert-wisdom-psych image indie fans and NY Boho Marfa shoppers “vibe” with. Myths is curated in the sense of bringing meaning to separate things, instead of collecting similar objects and calling them “curated.” People who are excited to hear this or that band they already love are going to hear something they haven’t heard, dig it, wonder why they’ve never listened to it before, buy a CD, and go home fans of new things. That’s great!

In putting on a destination festival, there is a danger of becoming a luxury product, but Myths avoids this by not selling VIP tickets or offering any of the other ubiquitous festival upsells (VIP water tent! Drug zone! Meet the famous person in 3D! Kiss the DJ’s feet!). Everyone attending has the same level of access.

The great thing about going to see stuff in Marfa is that it requires effort, and effort weeds people out. People who don’t really care about stuff go to things all the time, but they don’t go to things that require driving eight hours. It’s so much nicer to be in a cohort of people that are legitimately interested in everything going on. Herds gather, filing in and out of the shows together, quietly chatting before and after the show. People share a coffee with someone they just met. It is a gentle, sustainable, not so gratuitous pleasure of sharing something special with strangers.