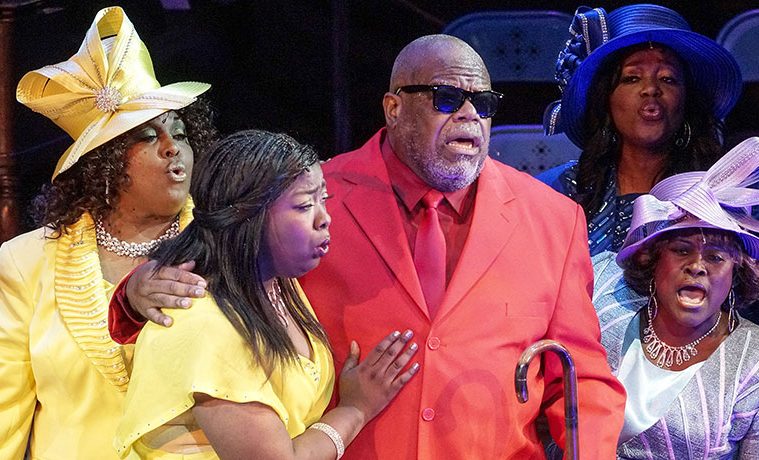 Lee Breuer’s The Gospel at Colonus Returns to the ZACH 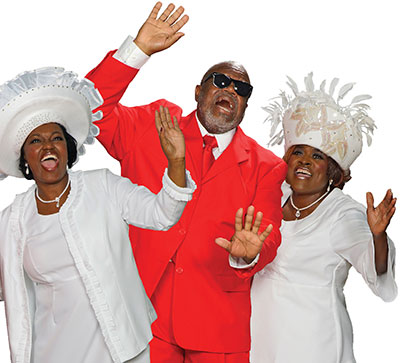 Lee Breuer’s The Gospel at Colonus is up at the ZACH Theatre until April 27. The work is a re-imagining of Sophocles’ final play. Though second in the trilogy before Antigone, Sophocles wrote the original on his deathbed. As such, I believe the work and all future adaptations sprang from its seed to bear a sort of Oedipal blessing that allows them to flourish despite the odds. Just as Sophocles struggled to stay alive long enough to pen the original, Lee Breuer battled an adversary who, much like Death, had the power to decide who could stay and who had to go: then New York Times theater critic, Frank Rich.

In the 1980’s, Lee Breuer was the captain of the good ship Mabou Mines, an experimental theater company dedicated to the “collective and collaborative” pursuit of making “pure art,” according to his interview with Bomb Magazine. Breuer and the rest of the collective, which included Philip Glass and Ruth Maleczech, were very successful and well received until Frank Rich took over as the Times theater critic. The first Mabou Mines show he reviewed was A Prelude to A Death In Venice. In his scathing review, he called for the National Endowment for the Arts to cut Mabou Mine’s funding. In the years that followed, Rich canned every Mabou Mines production, such that Breuer refers to Rich as the reason for his poverty. 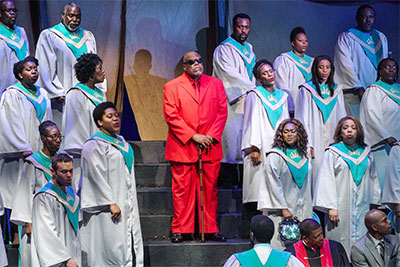 However, Frank Rich was no match the cathartic redemption inherent in Sophocles’s final work, and so the Fates conspired against him. Breuer’s Gospel at Colonus, starring the then unknown Morgan Freeman, opened at the Brooklyn Academy of Music. As much as Rich would have loved to tear into another one of Breuer’s works, he loathed the commute to Brooklyn and sent Mel Gussow instead, who gave the work a glowing review. The work then became a favorite at the Next Wave Festival and a hit on Broadway, earning a Pulitzer Prize nomination and an Obie Award.

Breuer took the classic tale of Oedipus’s redemption and applied the structure and form of a gospel mass, which has a lot of overlap with Greek theater. The Greek chorus involves heavy repetition of phrases between a cluster of voices who can speak for multiple characters or multiple facets of a single character. The Gospel has multiple voices per character, some which act and some that only sing. Furthermore, the gospel music, the spiritual branch of the same roots that fed blues and rock music, is structured in a repetitive fashion. 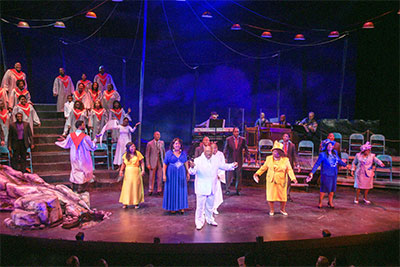 THE GOSPEL AT COLONUS. Photo by Kirk Tuck.

According to the ZACH’s dramaturg Russell Dembin, “repetition creates a pattern, which consequently and naturally grabs our attention at first, and then creates the comfort of familiarity…so what at first may be strange, after repeated exposure becomes clear and understandable.”

The ZACH production is staged in a revival tent on the banks of the river, a classic American image. Lacking a culture of sweat lodges, the revival tent serves a similar purpose in our nation’s folklore, providing a cleansing ritual. I can imagine early American pioneer Oedipus removing his hat as he enters the tent, and praying for redemption on the grounds that his sinful life was the product of forces greater than and unbeknownst to he, then bathing in the river, born again. 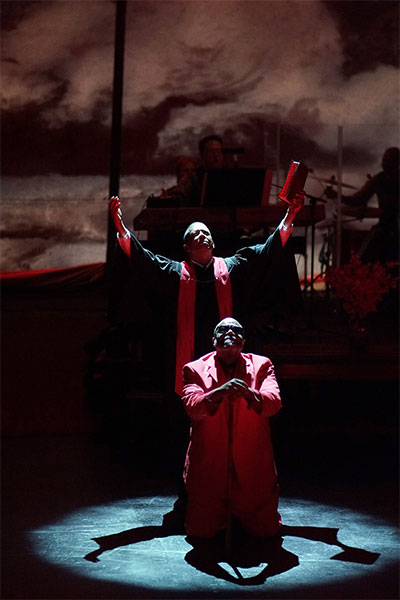 Eugene Lee and Tim Curry in The Gospel at Colonus. Photo by Kirk Tuck.

After overcoming both death and Frank Rich, The Gospel at Colonus has proved its cultural significance by also besting the test of time. It is rare that a work that originated in a 1980’s avant-garde scene finds its way to Broadway, and becomes a recurring staple of American theater. Much of the current cast was actually in Austin’s last production of The Gospel at Colonus 18 years ago. Recently, I had the opportunity to pick the brain of Kenny Williams, a singer who was in both productions.

Kenny was “raised Baptist and attended a pretty traditional Baptist church. The music consisted mostly of hymns and anthems with the occasional spirited gospel tune….usually performed by the youth choir,” however, his pastor “didn’t allow ‘all that’ rocking, clapping and dancing that is so often associated with the black church experience.” Kenny left Austin in 1997, not long after singing in the previous production, and joined the touring company for Grease! He soon found his way to Broadway, where he sang in The Lion King for nearly a decade. Now he is back and working on pursuing a musical career outside of the theater world. 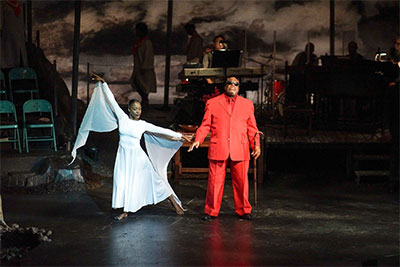 Christa Oliver and Tim Curry in The Gospel at Colonus. Photo by Kirk Tuck.

Gospel music easily transitions from a spiritual to theatrical context, because “it embodies a message of love and hope that is universal,” according to Kenny. “It is one of the few [if not the only] genres of music that transcends race, gender, culture and context. It is powerful and effective regardless of the setting.”

“In my opinion, the myth of Oedipus most definitely takes on the form of a biblical parable. It is a beautiful story of love, forgiveness and redemption, themes that are found throughout the bible, said Kenny. “And, having the story set in a gospel church service only magnifies those elements, making the story all the more biblical. In doing so, I think it also makes the story of Oedipus more accessible to all; bringing the language of ‘high art’ to the laity.” 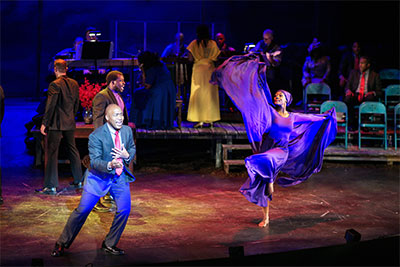 Kenny Williams and Christa Oliver in The Gospel at Colonus. Photo by Kirk Tuck.

I have a feeling that The Gospel at Colonus will be one of those performances where I wish we could do away with the whole seated audience concept. Bob Telson’s score invites hand clapping and foot stomping and a host of other gesticulations not normally associated with incestuous redemption. This is Mabou Mine’s dialectic at work, the fusion of the taboo and the sacred. The Gospel at Colonus, directed by Dave Steakley with musical direction by Allen Robertson and choreography by Christa Oliver, will be playing at the ZACH Theatre until April 27.