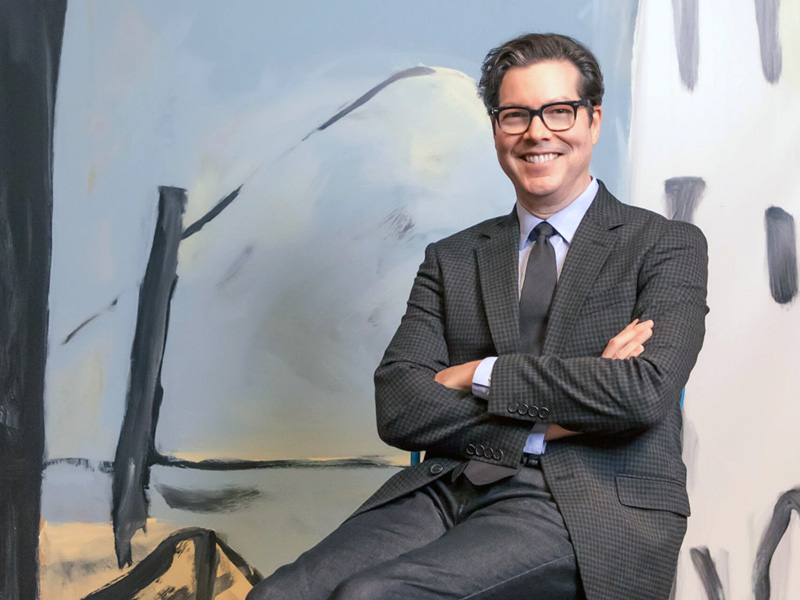 R. Scott Blackshire, curator of the McNay’s Tobin Collection of Theatre Arts. Photo courtesy of the McNay Museum of Art.

An orchestral score for a ballet wouldn’t ordinarily pop up in an art museum’s storage room. But the one in San Antonio’s McNay Art Museum, a score of Erik Satie’s surrealist Parade, was no ordinary example. It was stuffed with Polaroid photos of David Hockney’s designs for a 1981 production of Parade at the Metropolitan Opera. In the pages’ margins, handwritten notes commented on the ballet and its staging.

“I was so excited and happy to come across this piece,” says R. Scott Blackshire, curator of the McNay’s Tobin Collection of Theatre Arts. The McNay had proudly exhibited some of Hockney’s original designs for Parade. But the score, also part of the 12,000-piece Tobin collection, lay neglected in a box of Hockney ephemera until Blackshire unearthed it.

Hockney himself probably shot the Polaroids, says Blackshire, who is still working to nail down that and other details. Whatever his sleuthing turns up, Blackshire’s discovery will liven up the McNay galleries during Picasso to Hockney: Modern Art on Stage, which runs Oct. 17- Dec. 29.

As Satie’s rowdy music springs from loudspeakers, the score–blown up to more than 10 feet wide–will flash page-by-page onto a gallery wall. A Harlequin figure borrowed from Hockney will dance across each page, marking the place. 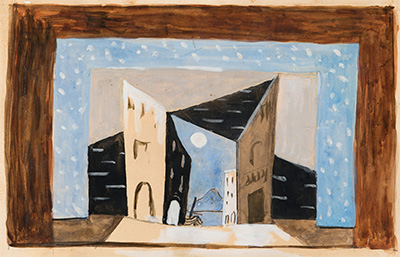 Picasso to Hockney is the largest show ever drawn from the Tobin collection–the first to take up the McNay’s entire banner-exhibition space. Featuring 120 works, from drawings and paintings to puppets, costumes and models of sets, it showcases a host of visual artists transplanting their creativity to the theater.

Starting with an outline drawn up by former Tobin curator Jody Blake, who retired last year, new curator Blackshire has added items from the main McNay collection to create “conversations,” as he puts it, among works. Picasso’s Man with a Guitar, a cubist engraving from 1915, hangs near the Spanish trailblazer’s watercolor rendering of his set for Pulcinella, a 1920 Ballets Russes production.

“In the 1915 piece, you can see the beginnings of his cubist style, which are undeniably in his hand as he created the Pulcinella design,” Blackshire says. From six decades later comes Hockney’s etching The Old Guitarist. “You’d think you’re looking at a Picasso,” Blackshire continues. “But you’re not. It’s Hockney’s homage–reimagining Picasso.”

Contrasts abound in the show. Natalia Gontcharova’s lushly painted costume designs reveal a kinship between the folk-inspired exoticism of her native Russia and the vibrant life she encountered while visiting Spain with the Ballets Russes. Looking back at early 1900s Americana through a Pop Art lens, Robert Indiana brings the festive air of a July 4 celebration to Virgil Thomson’s opera The Mother of Us All, from the colorful costumes for historical figures to a parade-float Ship of State.

Alexandra Exter leaves such terrestrial scenes behind in her costume designs for Aelita, Queen of Mars, a 1924 science-fiction film. The Russian artist indulges herself, Blackshire says, in a “crazy, out-there sense of design, imagining what life on Mars might be like.” Exter returns to earth with her marionette of a Spanish dancer, and visitors will be able to make a digital version of it dance at their command, thanks to a tablet computer nearby.

One of the show’s visual conversations reveals that artists create their theatrical illusions not only with sets and costumes, but with light. Soon after visitors enter, they’ll encounter a shadow puppet from late-1800s France, where Montmartre bohemians built theatrical shows around puppets’ images. In the last gallery, scenic designs by artist and theatrical director Robert Wilson illustrate how he saw the stage light interacting with his sets–and his designs for Christoph Gluck’s opera Alceste will come alive through video clips of a performance in France.

Blackshire, trained first as a singer, comes to the McNay with a doctorate from the University of Texas at Austin in performance studies. That focused his attention on how a community relates to art, he says, and at the McNay, “I bring a lot of that to our conversations. How do we create exhibitions? How will the public relate to this? … I want people to experience some kind of transformation, large or small, through the works they’re experiencing.”

Alongside Picasso to Hockney, a companion show–Painting for Performance–features five artists, including Georges Rouault and Jeff Koons. And Blackshire is at work on the next Tobin exhibition, which he says will “reintroduce” Robert L.B. Tobin himself, the San Antonio philanthropist and theater lover who spent decades amassing the collection that bears his name.

“Since his untimely passing 20 years ago,” Blackshire says, “there’s a whole generation of people who don’t know who he was.” Next year’s show will aim to clear that up. “He was really canny in his collecting,” Blackshire adds. “He was smart. And he was ahead of his time–often.”