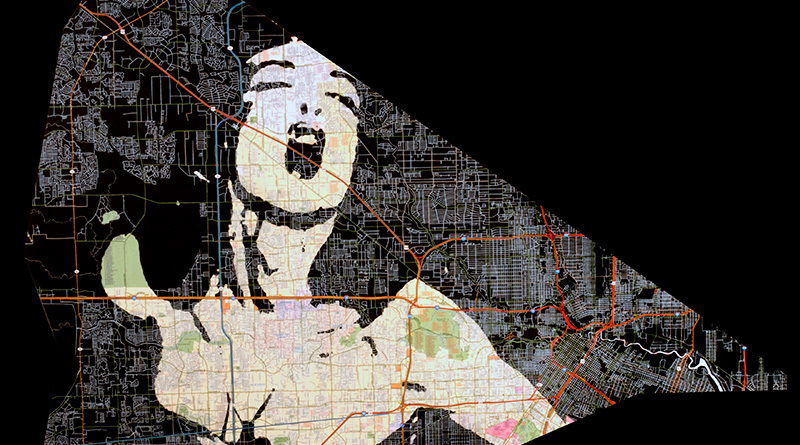 Stepping into The Scene (Houston: 1969 -1981) at Devin Borden Gallery, the space seemed small, tight. The works on the walls, framed maps and cutouts and a monitor likewise overlaid with a map, had a subtlety to them that allowed for a sense of openness in the room. It was here that Nick Vaughan and Jake Margolin presented a mix of older works and some new concepts generated from a series of interviews.

The piece from which the exhibition title takes its name is a series of 8 framed map cutouts similar to pieces presented by the pair earlier in the year and in years prior. The title, The Scene (Houston: 1969 -1981), provides context for the images. As the artists cut away maps to reveal images, they unleash bits of Houston’s hidden history. On the opposite wall hung a new series devised by Vaughan and Margolin, Houston Migrations, in which the artists documented their own journeys to Houston and then interviewed locals to learn of their paths here. The documentation takes the form of discombobulated maps that hop around and skip through space and time, reimagining geography to denote specific sites and make note of time and duration. Cut off by a black curtain, the front room of the gallery was striking yet meditative. Walking through that curtain, though, was akin to stepping into another world.

A shift in light, toned down and highlighted by a projection – off-kilter, spreading across the northern wall and ceiling – the tone of the exhibition takes a dramatic turn. Although it contained only the projection and two sculptural works, the space felt vibrant and brimming with energy. The two sculptures, Revolutionary Implements: Molotov Cocktails and Nail Lacquer, sat atop pedestals surrounded by two-way mirrors reflecting infinitely into themselves akin to a Yayoi Kusama Infinity Room. A pair of white high heels, one lying on the base while the other hangs suspended by wires, have rags stuffed into them. With the ends singed by flames, they sit in suspended animation – a historic moment frozen for remembrance. Nail Lacquer is comprised of a hot pink megaphone hung by ribbon above a matching base and likewise reflects throughout history.

The artists are humble in the way they speak about their work, but this does little to mask its ambition. Each project the pair undertakes is thoughtful and well-executed from conceptualization to presentation. The Scene (Houston: 1969 -1981) is no exception. Vaughan and Margolin strove to provide an exhibition that would act as a testament to Houston’s drag scene and its importance and political effect throughout the Stonewall Riots and the early days of the AIDS crisis.

Another recent example of this testament was presented at Aurora Picture Show in Political Gestures, a multi-channel video installation created in collaboration with Andrew Schneider. The video incorporates performances by drag queens, lip-syncing speeches from the 1979 Washington March for Gay and Lesbian Rights, and balances them along interviews with contemporary members of Oklahoma’s LGBTQ+ community.

Through these works Vaughan and Margolin show the historic role of the drag queen as drag culture once more enters the mainstream. As the artists highlight and uncover these political and social histories (whether hidden or broadly known) of the LGBTQ+ community, all the while remaining active in the current political climate, they build thoroughfares between past and present.