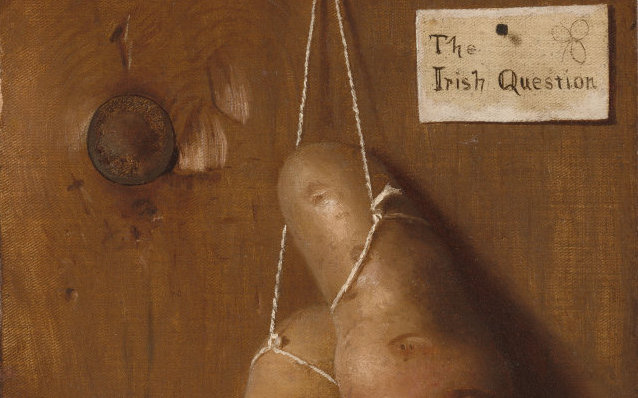 Of Paint, Peanuts, Potatoes, and Politics

On view through May 18 at the Amon Carter Museum of American Art, the traveling exhibition Art and Appetite: American Painting, Culture and Cuisine is an epicurean’s delight for the many scintillating depictions of all things culinary, from the Colonial era to the late-20th century, that line the galleries’ walls (read Leigh A. Arnold’s review here). But although sometimes a cigar is just a cigar, in this show, as in society at large, food is rarely just food; the politics of class, commerce, gender, race and ethnicity lurk in the background.

Take the wonderfully strange trompe-l’oeil paintings of De Scott Evans, whose depictions of peanuts and potatoes are both expertly painted and loaded with social and political implications. If they don’t stop you in your tracks, you’re in too big a hurry. As Art Institute of Chicago curator Judith A. Barter, who organized the exhibition, writes, “Free Sample, Take One retains the illusion of the rough, weathered boards of the painted shadow box even in the frame, which the artist … extended beyond the edges of the picture plane by painting the sides of the mounted canvas to mimic sawn planks and wood grain. Nestled inside the box, about a dozen peanuts lean against a pane of broken glass, with one poking forward, seemingly projecting beyond the picture plane.” A hand-written note–that is, Evans’s painted hand-written note–bearing the words of the title dangles behind part of the broken glass.

Evans painted various versions of Free Sample, Take One soon after peanuts started becoming available for sale in the late 1880s. This one’s the only one I’ve found with an extended, battered frame that adds to the picture’s illusionist humor. “At first, shop owners refused to carry them, as they were not considered fit for city folk,” Barter writes. “Observers decried the habit of eating peanuts on the street and discarding the shells, both of which were considered terrible breaches of etiquette.” Even more uncouth, of course, is breaking glass to steal peanuts, but as Barter observes, the note, which would have been tucked behind the glass, practically goads the viewer–or rather, according the the illusion of the painting, a previous visitor–into doing so.

“To reach for a sample is to invite harm and risk upsetting the delicately balanced peanuts,” she writes. “Furthermore, given the labor and racial struggles of prevalent at the time this was painted, the term free may be used ironically.” Talk about the tyranny of images.

But if you think that’s loaded, get a load of the hanging potatoes in The Irish Question, which Barter writes was probably painted around 1888 as the British Parliament was dating Irish home rule. In 1880, the Irish leader Charles Stewart Parnell toured the U.S. to rally support for land reform and home rule and to publicize the hanging of Irish protestors in England.

But the phrase “the Irish question” also recalled the potato famine of the 1840s, which killed one million people and prompted more than two million others to emigrate, mostly to the United States.

“Xenophobic fears were based in part on the belief that the potato had ushered in the demise of civilzation: the tuber was a base food because it was grown in the ground,” Barter writes. “Bread, on the other hand, which was made from wheat, required cultivation by human hands and was, therefore, a more refined product.”

The 18th-century English economist Thomas Robert Malthus had warned: “[T]he indolent and turbulent habits of the lower Irish can never be corrected while the potato system enables them to increase so much beyond the regular demands for labour.”

No wonder Evans, who painted under various pseudonyms, signed these paintings S.S. David while saving his real name–or rather a variation on his given name, David Scott Evans–for the “serious” work on which his reputation was based at the time: now-forgotten genre scenes and portraits of rich young women. Nowadays we remember him for trompe-l’oeil pictures like these. Had he painted them a century later, they might have gotten him into the Whitney Biennial.