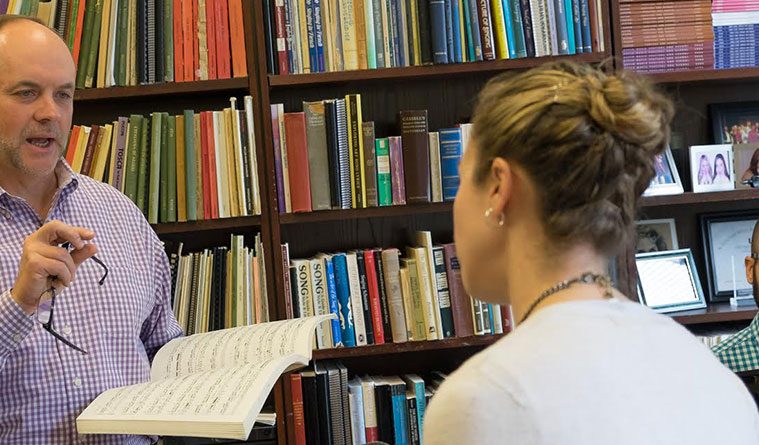 On the hunt for excellence

Voice teachers dream of having a student win the Metropolitan Opera National Council Auditions, one of the singing world’s most prestigious contests. Well: When this year’s competition winnowed hundreds of young hopefuls down to five equal victors, each of whom landed $15,000, Houston’s Stephen King had two  students in the winners’ circle. A few weeks later, another of his students landed an even bigger prize, the $50,000 Richard Tucker Award. 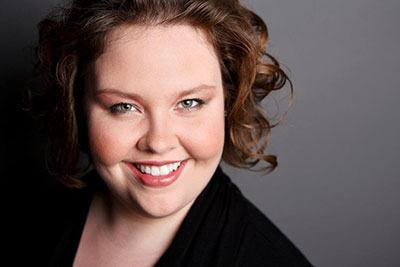 King chairs the voice department at Rice University, where Met winner Nicholas Brownlee worked on a graduate degree with him.  King’s other Met winner,

Reginald Smith Jr., is one of the budding professionals he coaches as head of vocal instruction for the Houston Grand Opera Studio. The Studio’s alumni include Tucker laureate Jamie Barton, who still studies with King as her career takes wing. Barton holds yet another opera-world mega-prize, BBC Cardiff’s 2013 Singer of the World. “If somebody wins Singer of the World, that’s unbelievable. That’s fantastic. But if you know the backstory, you realize that’s the icing on the cake. It’s not the cake,” King says. The prizes he values most are awarded not by contest judges, but by students who have mastered their voices. “Whether it’s written or oral, you get these these confirmations (from them) that, whatever the struggle was – and that’s usually how this stuff is figured out, in struggling – it was really worthwhile. That’s what I get out of it.”

At Rice and the HGO Studio, King works with some of the most promising talents around. Rice’s Shepherd School Opera Department caps its enrollment at 36 students a year so it can be choosy who it takes in, and its alumni regularly go on to top young-artist programs.  The HGO Studio has helped launch many of its artists into international careers. Soprano Tamara Wilson, who debuted at the Metropolitan Opera last winter as Aida, is just one recent example – and she’s another singer who still studies with King.

“Think about trying to teach 25 or 30 singers, with all their neuroses,” Wilson says. “That could be a lot of drama. But he’s calm and steady.” Wilson, who credits King with helping free up her high notes, says he has a knack for breaking down challenges into manageable pieces. “He uses words not in quantity, but in quality,” she explains. 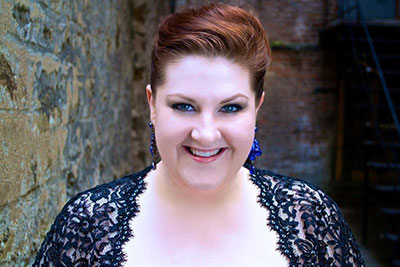 Forget the stereotype of the imperious teacher-maestro. King’s soft, mellow voice hints at his professional beginnings as a baritone; traces of a southern accent point even farther back to his youth in Alabama. He has lived in Houston since 2003, when he was lured away from the University of Kentucky by the piggybacked jobs at HGO and Rice. “We get the shiny apples,” King says. “We get the really talented people. In a way, the responsibility is bigger. You don’t want to be part of wrecking somebody who really has great potential. It’s just like in sports. You can give the wrong coaching to a great athlete, and it messes up the skill they just naturally have.” King never envisioned any of this when he was growing up in the countryside near Birmingham. His parents encouraged their five children to take music lessons, so King studied the piano and trombone; he sang in the church choir, too, and he played basketball on his high school team. But, lacking any strong career urge, King entered Auburn University as a science major. “Who growing up in Shelby County, Ala., thinks about being a professional singer or a professional singing teacher?” he says. A couple of years of science left him bored, so King decided to try music, since he had “a nice voice.” He soon found himself playing the title role in Giacomo Puccini’s comedy Gianni Schicchi. Not only did singing click for him, but King also met his wife, Amy. During graduate school at Florida State University, singing gigs began coming his way, helping convince King he was on the right track. While he worked on a doctorate in music at Southern Baptist Theological Seminary in Kentucky, a small college outside Lexington hired King to teach voice – even though he had next-to-no experience. 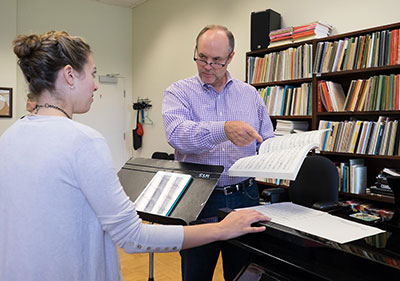 “I thought, ‘OK. This feels like the right thing,’” King says. “But those poor kids! They were guinea pigs. Fortunately, it was kids who were not going to go be professional singers. I wasn’t damaging their professional chances,” he adds with a laugh. Over the ensuing quarter-century, King’s several hundred students have taught him how to teach them, he says. “You don’t know what you’re getting into. Then it becomes a quest to know all you can about it,” he explains. Observation has shown him how different voices and different personalities behave. This has all unfolded while King and his students faced the unique challenge of learning to sing: working out the kinks of a process that’s hidden inside the body. “A singer isn’t touching their instrument, nor can they see their instrument,” King says. He calls the solution functional listening. “It’s listening actively to what’s going on underneath – to what’s going on with the mechanics and the breath and the vibration and the resonance,” he explains. The difference between what works and what doesn’t can be minute and elusive. King says it’s not coincidence that one of his hobbies is fly-fishing – another pursuit that demands patience, alertness and skill. “Some students are more open than others. They’re an open book. They walk in, they sing. You say, ‘Do this and this and this,’ and you’re done. Others are more concealed, whether it’s conscious or unconscious. They’re often the ones who get into their own way. Sometimes they’re the most talented, and you know that. So you just keep chipping at an iceberg, hoping to crack it. It’s rewarding. I do like the chase. I like the hunt.” —STEVEN BROWN