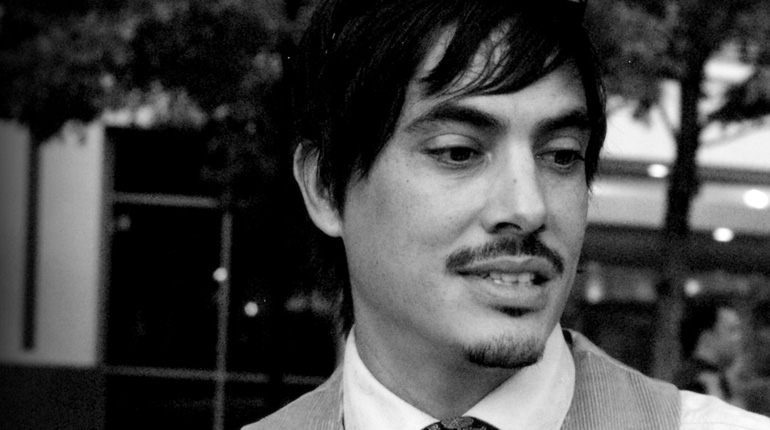 “Growing up in the inner city, in southeast San Diego,” acknowledges Martinez, “You have to have a certain bravado, a toughness about you, if you don’t want to be messed with.”

The thirty-six-year-old credits the street with steeling him for the poetry world. “Part of what makes people want to write is ego and pride,” he explains. But he finds it difficult to withstand the constant criticism, the constant rejection. “Writing is like a no game,” he says; “It’s just like the way some people date: They say, ‘I am going to ask 20 girls out and eventually someone will say yes.’” Martinez chuckles. “Somebody, somewhere is going to go out on a date with me.”

And it appears that someone does want to go on a date with Martinez. His first collection of poetry, Hustle, is set to be released in 2014 by Sarabande Books.

Martinez came to poetry the long way. A teenage father who barely graduated high school, he joined the navy and then on to Job Corps. When he decided to go to college, he got a scholarship to play basketball. Though Martinez never actually got off the bench, he did eventually get his degree. With some encouragement from his teacher, his application to graduate school was a lark. The poet now admits that his obliviousness to failure may have helped him along the way.

“I had to blindly believe, almost religiously, that this was going to work out if I worked hard – which, in the back of my head, I knew was bullshit!” He laughs again. Martinez’s easy laugh is punctuated by a wheeze that makes him sound exposed, vulnerable.

A kind of bildungsroman, the poems of Hustle follow Martinez through his gang years, when he was stealing cars; they explore his relationships, family, and end with his return to San Diego after finishing graduate school. This kind of eclecticism clearly attracts Martinez, who is wont to say that he is friends with “professors and pimps.” The tattoos that serve as armor for his chest, back and arm convey his desire to avoid being mistaken for anything concealable.

“I never want to let go completely of the kid from Southeast San Diego, who was a gang member and who did what he had to do to survive. That was in my head, that I needed to do these things. It wasn’t true. But that kind of perspective that I had – it’s important to me that that person is never too far from who I am. I don’t ever want to bleach who I am, to make myself academic… I want to be educated but I don’t want the kind of austerity that can come with that. The hospital cleanness. The washing-away of personality.”

Despite his firm roots in California, Martinez is inspired by Houston: “I have never been around so many different types of people. The plurality of people is my favorite things about Houston. In Houston you can find an apartment building and a factory right next to each other. There is no way that won’t find its way into your work.”

Martinez now sees his writing as a chart of who he is, following the narratives that build inroads to identity. In the poem “Calaveras”, Martinez recounts a night trying to steal a car, offering, “This is mine. Where is the window to break in your life?” As he openly examines his own shadows, he surreptitiously implicates the reader. The path he makes in exploring “the liminal spaces of gender, ethnicity, social, economics, class, education, the educated, the uneducated,” pulls the rest of us in through his lens, “… what you have been through helps define who you are.”

Currently, the poet is working to pull together a roundtable featuring prominent Latino/a writers for a feature in the Spring 2013 issue of Gulf Coast Magazine, where he serves as Reviews and Interviews Editor. The process of constructing the panel has made him painfully aware of the dearth of Latina writers in our area.

This fuels Martinez’s attempts to transfer his own inspiration and resolve into his students at the University of Houston, “Everyone has witnessed some one who is physically gifted where you are like that person runs faster, bigger and naturally stronger …Writing is no different. It’s not just the most athletic people that make it to be professional athletes. It’s the people who put in the most effort, the people that work, the people that have enough things going right for them that they can make it work.”

David Tomas Martinez is published or forthcoming in San Diego Writer’s Ink Volume 2 and 3, Charlotte Journal, Poetry International, and been featured in Border Voices, among others.

-NICOLE ZAZA
Nicole Zaza has worked as editor for Gulf Coast and Envy Magazine. A Houston native, she graduated with an MFA from the UH Creative Writing Program. She works as an adjunct professor at San Jacinto Community College and teaches writing classes at Inprint.