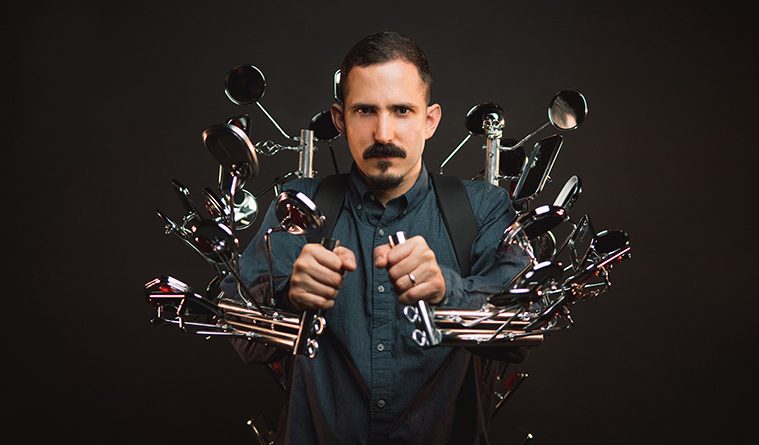 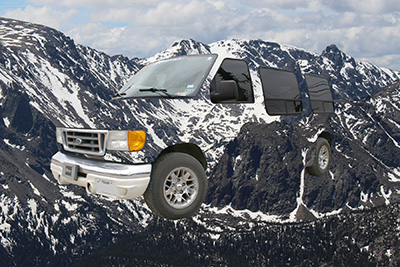 In her description of her artist/partner, Megan Harrison says Jimmy James Canales is “kinda like a cat. He brings in a dead bird from the yard, and I’m like ‘I can do something with that.’”   The two artists (his primary focus is sculpture and performance, hers is drawing and painting) have worked with an unusual closeness over the past several years, seamlessly weaving full collaboration and individual bodies of work.

I spoke to the San Antonio artist pair in the wake of his striking Para Chrome, a sometimes-haunting, sometimes-humorous exhibition of sculpture and performance that borrowed visual references from such seemingly disparate places as 1950s hot-rod culture and 1980s sci-fi.

One work involved Canales, garbed in an “exo-suit” of side-view car mirrors as a kind of modern-day Narcissus. Having been acquainted with the work of both artists for some time, I could not help but see the elegance of Harrison’s work leaching into Canales’ presentation.

“I like that idea of it being more fluid or more open, we kind of rub off on one another. The thing that I’m interested in is that open possibility,” he says. On this Harrison agrees. “If he has a show coming up, it’s all hands on deck,” she says. “[There’s a] sense of commitment to each other’s work that makes you more bold.” As art viewers, we tend to assume that the name on the museum placard is the beginning and end of the story, but Harrison and Canales prove otherwise.

It may sound like a tiny, two-person Utopia, but the deep artistic trust between the pair was built intentionally. In 2015, they took a Kerouac-ian cross-country journey in a conversion van outfitted for impromptu camping. Canales explains, “We took off a year. We didn’t have a landing plan. We just wanted to quit our jobs, buy a van, travel around the United States, possibly Canada, maybe Mexico.” Titled Re-charting Pre-charted Territory, the trip was, as Harrison explains “about swapping out secondary experiences for primary experiences. [We wanted to see] natural spaces and cultural spaces firsthand. It was a comparison between the fantasy of the landscape and the real thing. We were really open-minded. We were there to study.”

They bounced around to a couple of residencies, toured national parks, and slept in many a Walmart parking lot. Harrison explains it as an experiment to “abandon the studio, to see if we really needed a studio to be artists.” 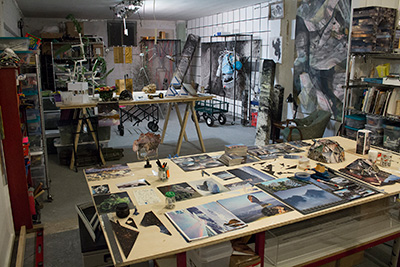 In the end they returned to San Antonio with thousands of photographs and seven months worth of genuine American road trip behind them. They still have the van. “It was like a third person on that trip with us,” Jimmy jokes in characteristic deadpan. But the trip proved one thing without a doubt: “We did make some work out there,” Harrison says of their art-without-a-studio question, but “you really need that laboratory space to go back to.”

Now the pair are working on separate ventures out of a single studio. She is planning an exhibition of “large scale, unearthly landscapes [using] photographs of natural spaces taken during [their] yearlong expedition across the United States. They will be “combined with romanticized landscapes from calendars, and images sourced from NASA telescopes.”  Canales is turning his focus from Para Chrome’s “exo-suits” to “portable installations that you can wheel into an environment or space.”

Canales and Harrison’s is a case study in the wealth of art that can be created from a hard-earned and generous collaboration. “It’s obvious that we are looking at the same things and thinking about the same things,” she says. But the separate bodies of work are translated through two very different brains and processes, and there isn’t always cohesion on the front end. For example, Harrison tentatively tosses out the word “intuitive” when describing her own process, “I feel that the word has been misused.” As an outsider, I would describe it as scientific in its position, and poetic in its execution. Canales is more of a planner, although the full beauty of his vision isn’t always evident in that stage. At this point they both leave it to trust. “My brain just doesn’t latch onto it, but I learned to trust Jimmy’s ideas. They’re always exactly like he was explaining, but nothing like I’d imagined.”