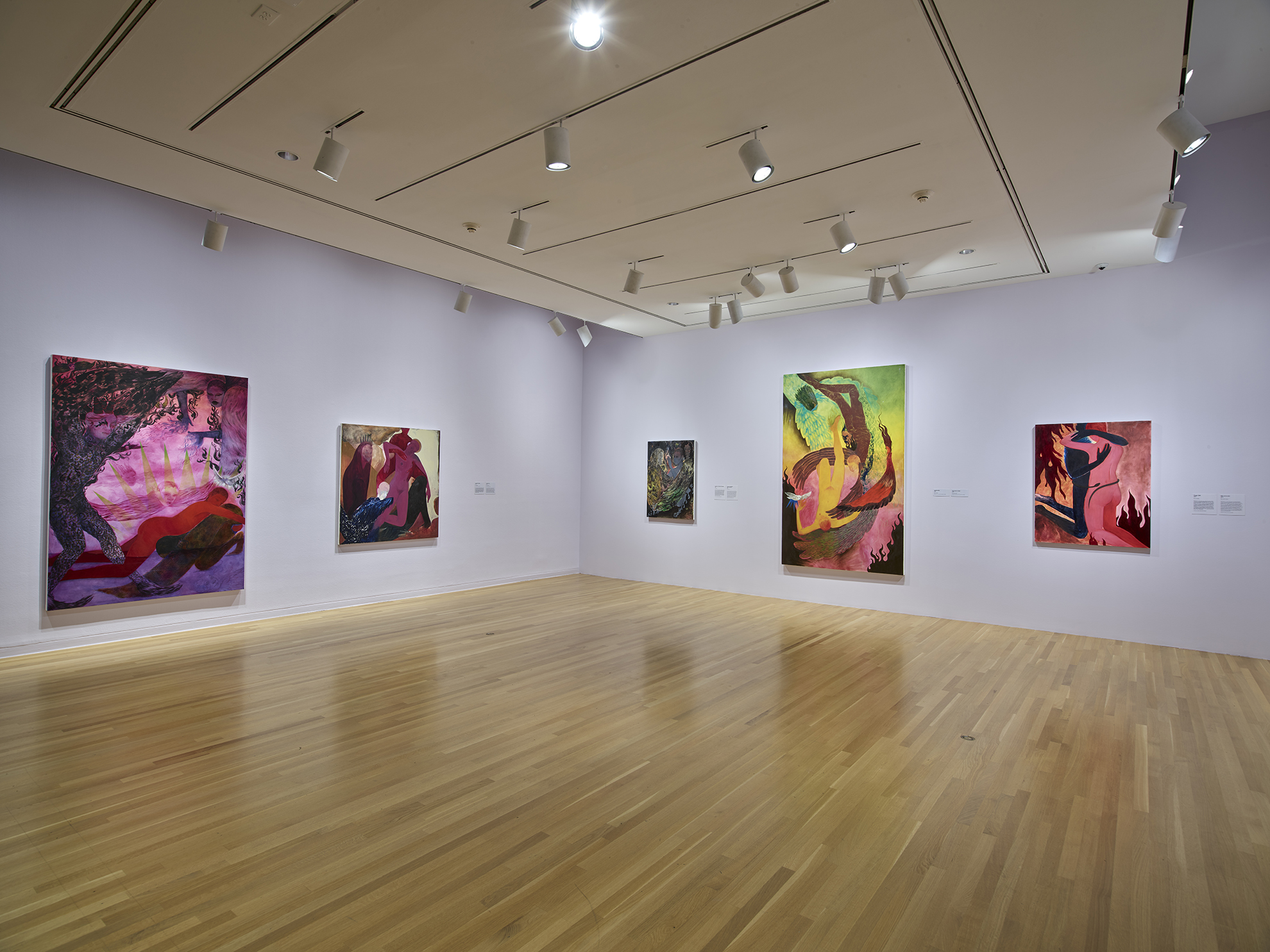 A World Apart: Naudline Pierre at the Dallas Museum of Art

When Hilde Nelson was applying for her position at the Dallas Museum of Art as Curatorial Assistant for Contemporary Art three years ago, she had a dream list of artists with whom she wanted to collaborate. Among them was Brooklyn-based painter Naudline Pierre, whose career Nelson had already been following. In September, Nelson’s wish came true: She curated the DMA’s new exhibition, Naudline Pierre: What Could Be Has Not Yet Appeared, on view through May 15, 2022.

“I think her (Pierre’s) work is envisioning ways of being in the world that seem apart from our world, but are important strategies for existing within our own,” Nelson says. Pierre’s work, exploring questions of escape, rescue, ecstasy and transcendence, are distinct for their rich, jewel-toned hues and otherworldly characters. Her style is sometimes likened to that of Renaissance altars bearing religious iconography, which, in part, may be credited to her religious upbringing as the daughter of a Haitian minister. “It’s really instructive to her view of the world as something in which there are many things that we cannot see, that always surround us,” Nelson says. “And in some ways, she’s visualizing those things and I think we gesture to that with the title.”

This is the first solo museum exhibition for Pierre, though not the first time her work has been on display at the DMA. The museum acquired her 2019 painting, Lest You Fall, as part of its permanent collection in 2020 and it is one of the central works in the show. Nelson describes it as a pivot point from some of the early aspects of Pierre’s practice, showing the artist’s skill at layering colors to create a sense of movement of the models’ bodies, of pressure, and hands on flesh.

­­­
Five of the ten pieces on display were created especially for the current DMA exhibition. “When Naudline asked if she could create new work for the show, I was incredibly excited to give her the space to do that and to really experiment,” says Nelson. “It’s not often that we get to have that kind of collaborative relationship.”

Visitors will notice a recurring protagonist in three of the new paintings, rendered as a femme in a solid, opaque form. In Hereafter, Ye Shall Be Changed, flames lick from her palms as winged figures envelop her, as if they’re guiding her through a moment of change, notes Nelson. The femme then transforms to radiate with a perceptible red glow while embracing another winged character in To Make You Whole. Then, she is refashioned yet again by donning fiery wings while soaring through space in Power Within. “For Naudline, it is a matter of how this protagonist is growing and changing and shifting and transforming,” Nelson explains. “I think that transformation is hugely important for her work and that idea of shift and change.” 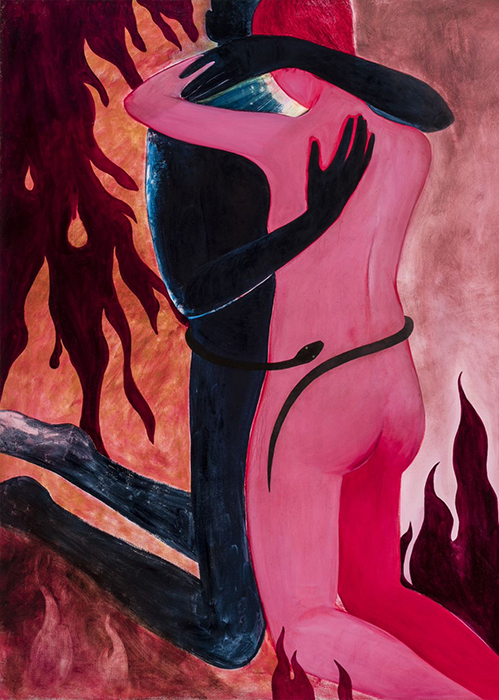 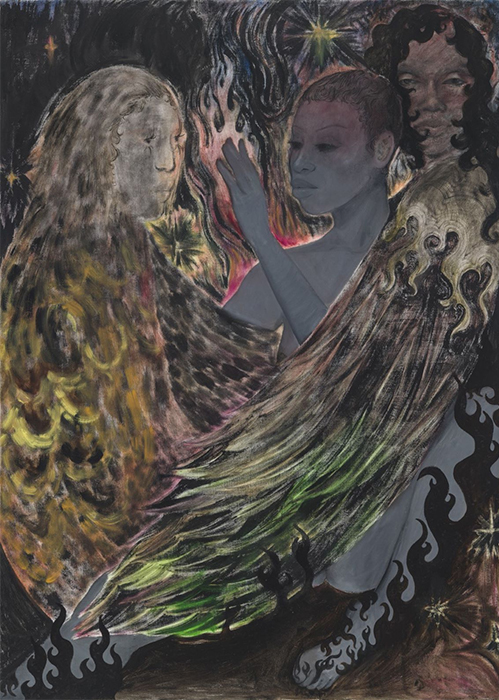 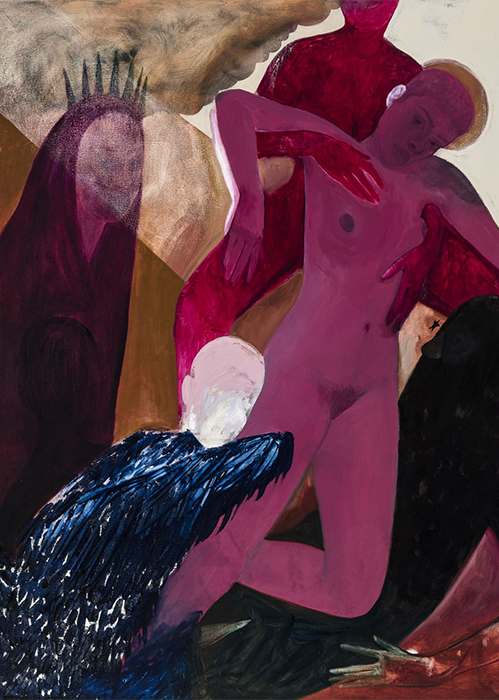 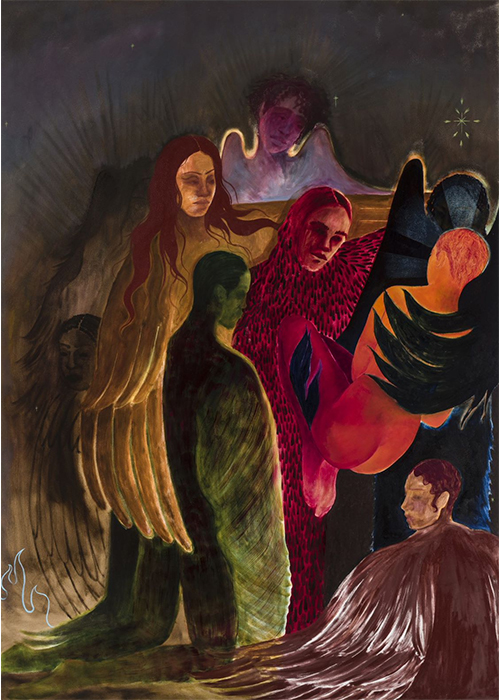 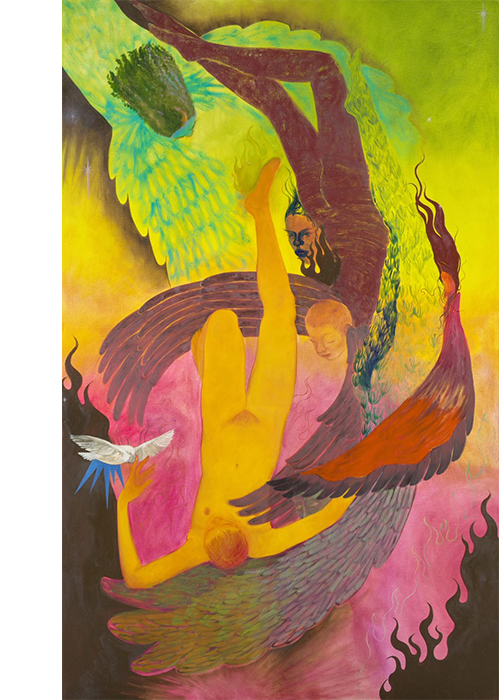 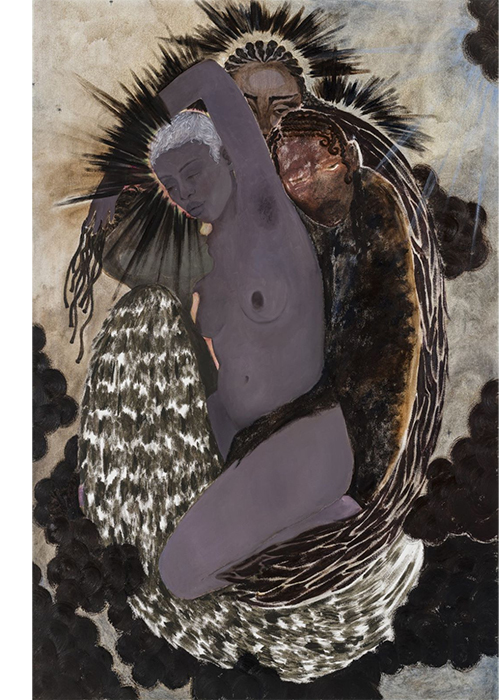 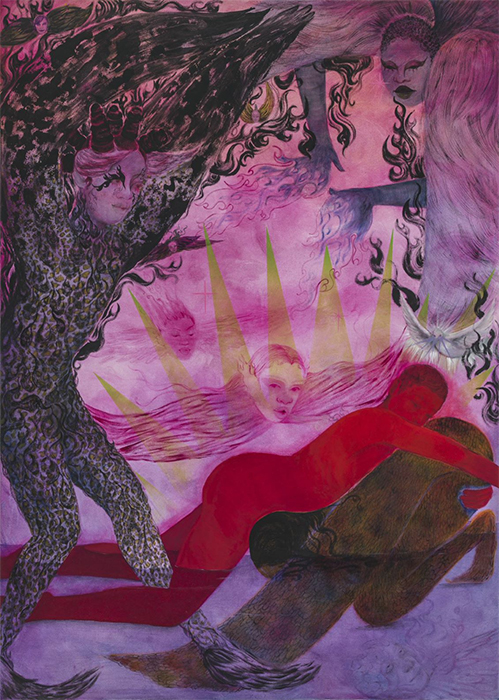 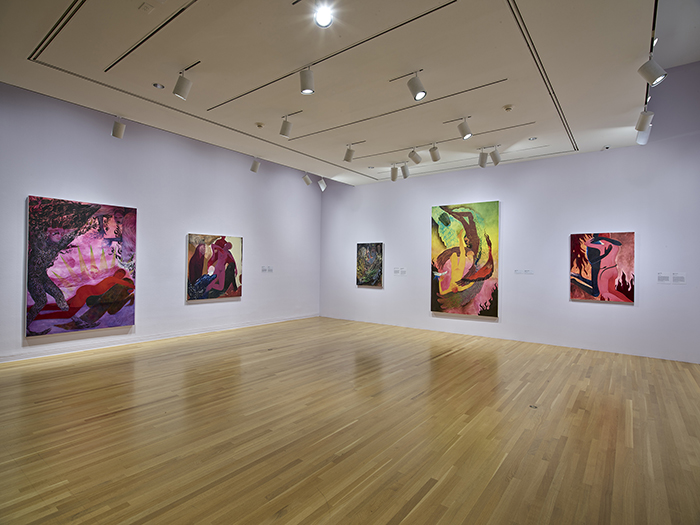 It’s an understatement to say that the final two new works, Guardian (Somewhere) and Guardian (Elsewhere) are larger than life. Standing nine feet high, they are positioned on each side of the door so they’ll be the last works visitors will see as they leave. As the names imply, they serve as protective beings who are watching over the space. “They’re intended to provide that sense of calm and self-assurance for the visitors in the space,” says Nelson. “But Naudline is also very explicit that, in some ways, they’re protective beings for the figures in her works.”

The downstairs gallery also includes three additional works by Pierre; two from 2017 and one from 2019, all equally striking in ethereality and resounding color.

However, there’s one more painting that visitors won’t find in the downstairs space with the others. Upstairs in the European art gallery amidst religious devotional paintings of past centuries, hangs Pierre’s Too Much, Not Enough. “We wanted to gesture to the fact that she is in conversation with these earlier works,” Nelson says. “By inserting her work into the space, we’re hoping to introduce a dialogue that’s maybe on more equal footing about how she is part of this conversation—not just influenced by it, but actively reinterpreting it, reshaping it, and contributing something new to it. I think her works feel incredibly new in that sense because they’re engaging. They’re offering something entirely innovative.”