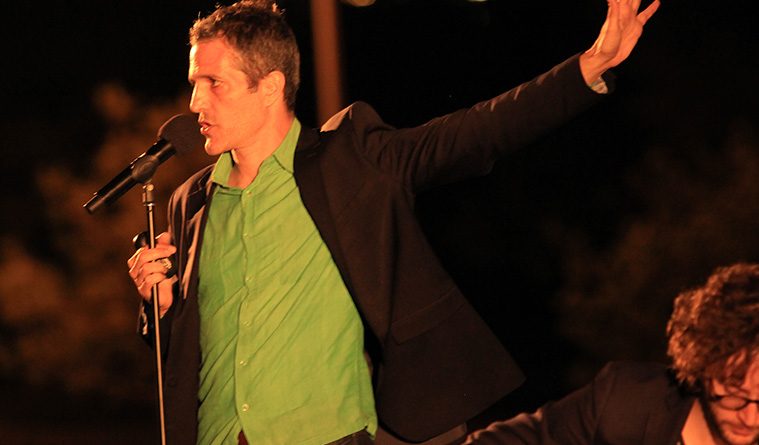 Sam Green in The Measure of All Things.
Photo by Christopher Shea. 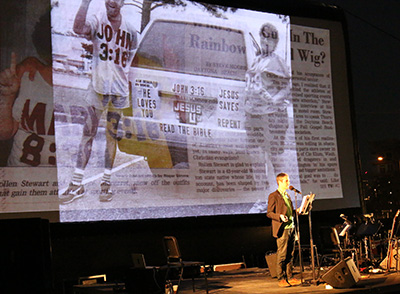 Sam Green in The Measure of All Things
Photo by Christopher Shea.

A Visit to Austin’s Fusebox Festival

This year Fusebox Festival felt light on theater. Austin’s annual cross-disciplinary experimental arts festival packed two weekends with plenty to see and experience, with numerous exhibitions and installations spread throughout the city to explore by day and just one, or maybe two, theatrical productions by night. Certainly, this made it easier to see it all, but it also signaled a renewed vision for the festival.

According to the festival’s executive and artistic director Ron Berry a few of the theatrical projects he’d hoped to present at the festival didn’t coalesce in time, but as we reported in the April issue, this year was also focused primarily on the thinkEast project that debuted during the second weekend. For the first five days of the festival, a lot of the festival entries focused on the art of listening, and themes of reconsidering grand narratives — a theme that felt very apropos.

The festival kicked off with a deconstructed screening of documentarian Sam Green’s latest project, The Measure of All Things, in which he visits people and places featured in the Guinness Book of World Records. As he narrated live, and Brooklyn-based yMusic stitched it together with music, the film played on a large screen behind which the audience could see the skyline and Town Lake.

In the film, Green uses the exceptions to nature’s rules, whether it’s the woman with the longest name (you should see her driver’s license), the quietest place on earth, the man who spent days trapped in an elevator, the oldest man on earth, and then the next oldest man on earth, to paint a portrait of the variegated garden of human existence. For the rest of the weekend, this seemed an appropriate thesis, or foundational perspective, one that placed value on the abnormal, or rejects any idea that we base our equality on our sameness. If there were universal truths to be found in the work at the 11th edition of Fusebox Festival, they would arrive out of a respect for individual stories and situations. 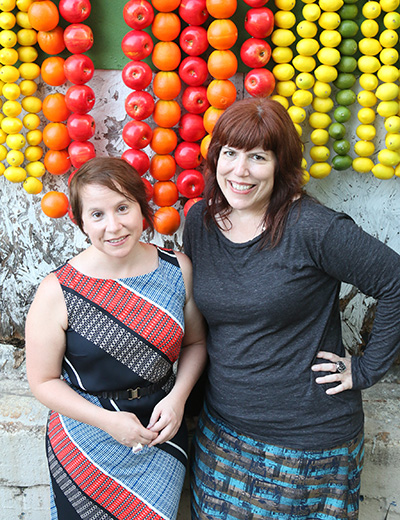 These ideas could be folded into nearly every event, performance or installation that took place that first weekend. The second night of the festival, the evening kicked off with an artist talk hosted at the Off Center by the Grownup Lady Story Company. Annie La Ganga and Rebecca Beegle led a series of these talks throughout the festival, calling them “We Need to Talk.” Writers and comedians in their own rights, La Ganga and Beegle weren’t stiff scholarly types nodding and rubbing their chin as artists pontificated on the genesis of their work. Quite the opposite. Completely aware of the pretense of a typical artist talk, they teased each other about etiquette and shoe choice, asked deeply personal questions about the dating lives of the artists and waved to their friends in the audience. In the first iteration of this event, which took place as a happy hour, they chatted with art collective Los Outsiders, and performance artist Daniel Alexander Jones, who just days before had won the prestigious Doris Duke Performing Artist Awards (notably, he shares the 2015 honor with Rude Mechs’ Shawn Sides, who was in the audience that night).

This kind of respectful levity is a selling point for the Fusebox Festival, where tickets are free, and booze is served at nearly every event. It’s meant to be a social experience with work that sparks conversation, with the help of that gratis glass of wine. And for the most part, it’s successful in its endeavors. Everywhere you turn, there are big smiles and booms of chatter and laughter.

Even the art installations throughout the city that sit under the festival umbrella generate this sort of camaraderie. Flat Earth Folded, an installation at Canopy by Greg Pond + Jesse Cahn Thompson, was a spectacle to behold. Visitors inside the gallery drew puzzled looks through the windows, as they were seen pressing their ears to the glass, or laying with ear to the ground to hear the reverberations of the music that was quietly humming through the physical surfaces in the room. A sculptural installation that demands both presence and participation, the gallery turned into a place where visitors didn’t just commingle next to the art, they altered the way it was experienced. Press your ear to the glass simultaneously as another visitor and the sound changes, and this almost demands acknowledgment amongst visitors.

In much the same way, the language-driven work of the weekend became shared experiences. In a trek beneath the Lamar Boulevard Bridge to listen to 100 Years in 500 Words, you stood with another adventurer or two, and there you would download stories written by Austin writers like Sarah Saltwick or Elizabeth Doss about the flood zones, to experience in a site-specific environment. If that doesn’t generate conversation, what can? 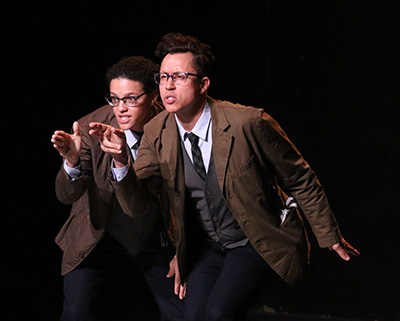 After a performance of The Integrator’s Manual, a piece that Daniel Alexander Jones is currently workshopping about the failures of undoing segregation in America, the festival hub transformed into a tiki bar. There, the topics of marginalization and self acceptance, themes that ran through the Manual, lingered in conversation.

Perhaps the one failure of Fusebox Festival is also its strength. As a festival that blurs the line between audience and performer, emphasizing the resulting conversation as much as its impetus, throughout the first weekend it seemed to be a reunion of old friends, instead of the making of new ones.

I performed the role of eavesdropper, overhearing some of the most interesting moments of the festival, instead of participating in them. Then again, Fusebox Festival is a community driven event, and the themes this year were of owning your personal narrative, and engaging your neighbor in productive conversation. And perhaps I could have chosen to play a different role, or maybe as a visitor from Dallas those weren’t my conversations to be had. Either way, even the smallest moments were filled with a kind of theater, just not one I was expected to cross my legs and sit through silently, unless I so chose.