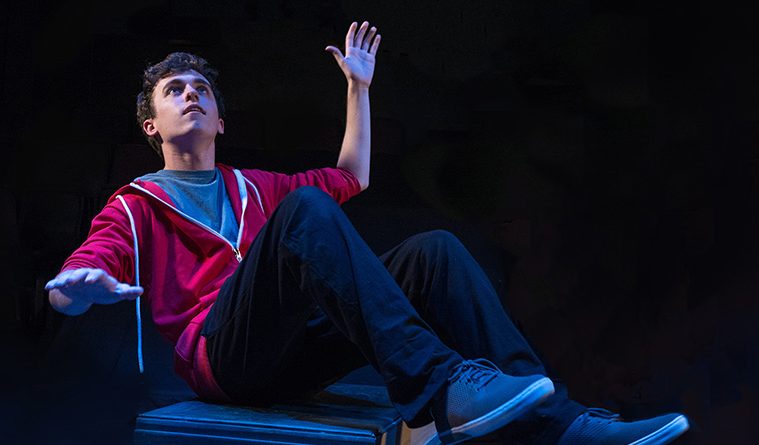 Order in Chaos: ‘The Curious Incident’ lands on the ZACH Theatre Stage

Preston Straus as Christopher in the ZACH Theatre production of Simon Stephens’s The Curious Incident of the Dog in the Night-Time, Jan. 31-March 4 at Topfer Theater.
Photos by Kirk Tuck. 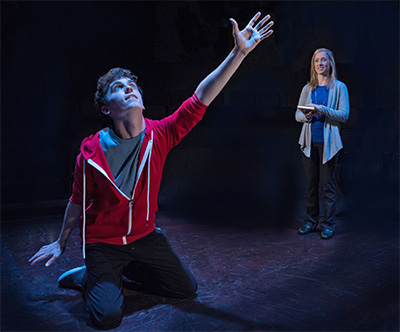 Preston Straus as Christopher and Katie Kohler as Siobhan.

ZACH Theatre presents the Austin premiere of Simon Stephens’s The Curious Incident of the Dog in the Night-Time, Jan. 31-March 4 at Topfer Theatre. Based on the beloved 2003 mystery novel by British writer Mark Haddon, The Curious Incident chronicles the story of 15 year-old Christopher Boone, an autistic boy enormously gifted in math but lacking the social skills to navigate everyday life.   He discovers a murdered poodle on a neighbor’s lawn, and the mystery unravels in Christopher’s mind and on stage.

The play won the 2015 Tony Award for Best New Play, and toured the US, stopping in Houston and Dallas, but not Austin. ZACH artistic director Dave Steakley is proud to be the first professional theater to present this breakout play to Austin audiences. “I saw it in London when it first came out at the National Theater, and I knew wanted it for our season,” says Steakley, who went on to see the show many more times and read the book. “Its appeal is cross generational; people of all different ages are drawn to this story.” A story told from the point of a young man who is unable to process disorder also intrigued him. Steakley adds, “I’m always interested in plays that can serve as a welcome mat to a different part of our community.”

Steakley, who is directing the show, also appreciated the physical nature of the ensemble and the savvy way technology was employed. “It was a fresh approach.” And with frequent ZACH collaborator Stephanie Busing designing both the projections and sets, Steakley wants to give the production his own stamp that will combine high and low tech elements. Inspired by the documentary on scientists falling in love with origami, Between the Folds, Steakley found his visual language that is both magical and tactile in origami. “The paper will ground the production,” he adds. 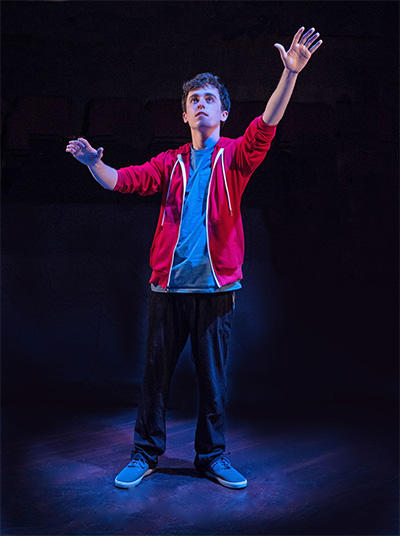 The play requires a strong young actor who can carry the entire emotional arc of the evening. Steakley began his search for his Christopher over eight months ago, so when Lauren Lane, Head of Acting Texas State University, called saying she had someone in mind, things started to look up. After meeting Preston Straus, Steakley knew he had his Christopher. “His parents had taken him to London to see the play and he fell in love with it and wanted to do it.”

The ZACH has been a leader in offering special sensory-friendly shows for children, but Curious Incident will be the sensory-friendly mainstage show. “I’m hungry to see this one on a large scale,” adds Steakley.

According to Steakley, a play about persevering and succeeding is spot on for these unpredictable times. “It’s about coping in a world of discord which is both disorienting and unsettling to folks. I see a parallel to our times as we wake up to chaotic events. How do you maintain your equilibrium?”

But there’s a deeper reason he wanted to bring The Curious Incident to the ZACH that touches on our humanity. “It expands our hearts and minds,” he says. “We need to celebrate what people are good at and appreciate the differences in others. How do we become more compassionate?”