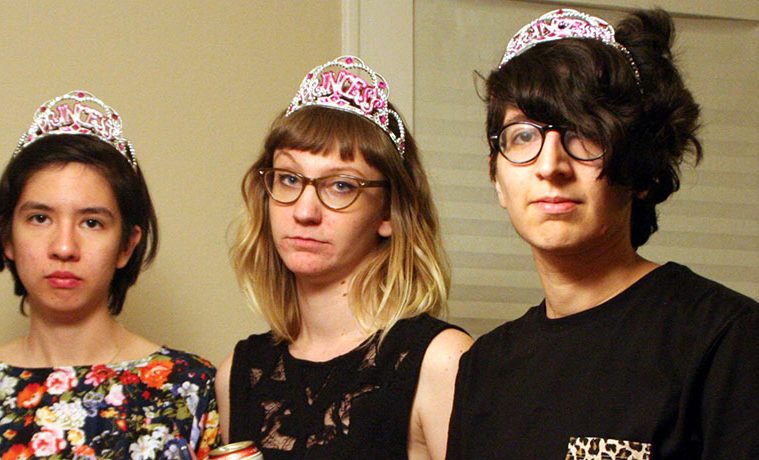 Popping Up While Putting Off

On any given day, the anonymously adorable 1930s bungalow looks just like the other houses on Barbee Street in Houston’s North Third Ward. Its occupants, Sara Balabanlilar, Sarah Rodriguez, and Veronica Leon—students at the nearby University of Houston—go about their daily lives, eating, studying, and putting off assignments. What sets these students apart is that while they’re procrastinating, they’re helping change the face of Houston’s art community. “Let’s not do our homework; let’s make an art space,” Rodriguez remembers, and that’s what they did. Every two weeks the trio transforms its quiet little bungalow into Barbee Manshun, an art space and creative outlet serving a community of underrepresented artists.

Inspired in part by Mexico City-based artist Nuria Montiel’s participation in public pop-up events called La Galería de Comercio, the front room of the bungalow undergoes a metamorphosis, and Barbee Manshun emerges. “[Montiel’s] group of artists picked everything in a democratic way. That idea of art as temporary and accessible is something that I aspire to,” Balabanlilar said. “We’re providing a space for artists who are up-and-coming, amateur, starting out, who would not have a space in the mainstream setting.” In April, Let’s Go Shopping transformed the space into a vibrant marketplace as artists Michelle Yue of shopnonhuman and Kevin Burnett of Spicy showcased their works and peddled their wares.

Barbee Manshun is a space for both experimental and traditional events, ranging from art shows and markets to workshops and sensory-deprivation musicals, in an environment that is hyper-casual and intimate. While identifying as queer artists of color, the Barbees aim to reflect the city’s diversity while emphasizing shared artistic concerns over shared identities when mounting group shows. While some may argue that there’s a high level of over-saturation in the Houston art scene, Balabanlilar disagrees: “Houston has a lot of room for things in houses: things that are last-minute, pop-up things, things that aren’t quite right, things that aren’t quite organized, things that might not work, things that will offend your mother, things that will offend you as well, and things that offend me, even though they’re still in my house!”

Barbee Manshun offers a milieu that strays from the contemplative silence of gallery spaces and encourages music and conversation. You find yourself in a happy medium between an art show and a house party. This past month, a presentation of Cold, a sensory deprivation musical by You(genious), stripped the audience of its comfort and sight, forcing a shift in focus to the aural experience of the layered soundscapes produced by Danimal.

Running in a fashion that’s as similar to Houston music venue Ponderosa as it is to experimental art space Alabama Song, Barbee Manshun’s house-party appeal draws audiences from outside the arts community, many of whom learn about events by following the Barbees at facebook.com/BARBEEMANSHUN. “It’s a lot less intimidating to have a conversation about art in general or the social implications of the hierarchy in galleries when you’re not being forced to be quiet, drink your alcohol, and look at the art,” Rodriguez said.

Presented as artistic gatherings without organized talks or structures, the events promote a setting in which people, newcomers and veterans of the community alike, are free to participate comfortably. “It’s not just art, because anything is art at this point,” Rodriguez said. “We’re beyond art as a label. If anyone has an idea they think is unfeasible in their current space, that’s why we’re here.”