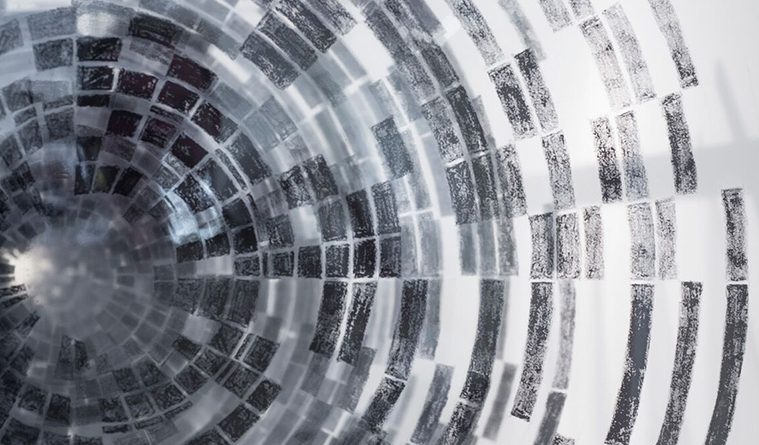 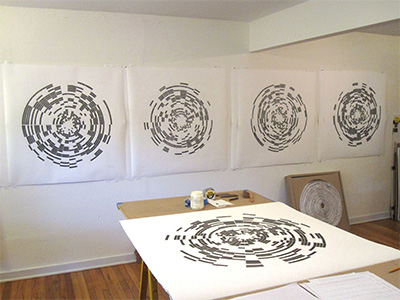 By nature, a journal records one’s journey of growth: Entries enumerate every private thought and personal experience, and if we are fortunate, these tightly bound pages illuminate one’s life. A calendar can function as a registry, or chronology, providing a certain order to one’s life. Both calendars and journals require amending and alignment to sustain productivity. It is this shared synergy that artist Annette Lawrence has masterfully perfected in a ciphered language that is concealed yet revealed.

For Standard Time, her upcoming solo exhibit opening at Conduit Gallery, Jan. 9 – Feb 13, Lawrence has transformed 25 years of journal writings into 12 graphite drawings on paper and a multi-layered transparent photo print installation. The graphite drawings reveal the mark of Lawrence’s hand while maintaining the privacy of her written words—words she began writing in 1983 as part of a classroom assignment. “All freshman core students had to keep a journal and write about their work,” she explains. From the beginning her entries were more personal than academic. “That’s not what the journals are for,” Lawrence says, fondly remembering her professor’s response to her journal. To Lawrence, however, it was all the same.

In all of her years of chronicling her life and work, she appreciates the fact that she is able to see herself growing up, developing page by page and maturing with each experience. Experiences such as taking the leap to move to Texas, a place she had never visited, from Maryland after urging from classmates (who were from the lone star state). This move would prove to be a pivotal moment in her life, “I got all kinds of love in Houston,” she openly admits. Although the city and the artist community welcomed and embraced her, it was still challenging in the beginning. Like all young artists, she found herself in the adjunct grind, teaching and commuting to different campuses, working at a local bookstore and with non-profit arts organizations while still maintaining her studio practice. 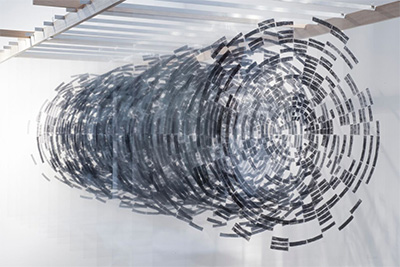 Often, this lifestyle can take a toll on artists, leading to burnout and cynicism, but not for Lawrence. “There’s only one thing I’m doing [creating art], how can it not happen?” she asks. Her determination to be in the studio producing work came before anything else, she says. “Making art was first, even if meant sacrificing personal relationships.” This dedication would lead to some of her most successful works such as the Drawing Blood series, in which she incorporated dates, text and her menstrual cycle as a medium. While others considered it provocative and unsettling, Lawrence hoped to challenge the traditional taboo surrounding natural occurrences. “The human fertility process is something that affects so many individuals it shouldn’t be marginalized or treated as an affliction,” she states. She could never understand why little marks of blood put so many people off, when most of us have no problem with blood from violence, injury, destruction depicted in entertainment forms.

Even when artists have prolific breakthroughs in their studio it doesn’t always equate to immediate success; there are unsuccessful studio visits, rejection letters and many meals of pasta that follow, and it wasn’t any different for Lawrence. Years of constant rejection have a way of building character and resolve and ultimately, preparing an individual for success. As the Bengali writer Rabindranath Tagore once stated, “Everything comes to us that belongs to us if we create the capacity to receive it.” Lawrence’s journal was eventually filled with residencies at the Core Program at the Glassell School of Art, Skowhegan, an invitation to the Whitney Biennial and the offer of a full time teaching position at the University of North Texas, where she is currently the Chair of the Art Department for the School of Visual Art. One could say, the stars in her celestial calendar aligned perfectly.

These days Lawrence finds herself spending more time returning emails and jotting down do-lists than writing in her journal, a practice she plans to pick up again when her tenure ends as Chair in July. Even though her writings have dropped off a bit, it hasn’t altered her studio practice; after long days at the office she returns to the studio—her spiritual refuge, a place that allows her to have a meditative experience while she creates. In an age where over sharing and social media saturation is the norm, Annette Lawrence still values privacy and respects boundaries, which is why her most personal thoughts will continue to reside in the pages of her journal.

See more of Lawrence’s works, including pieces from her formative years in Around Again, Jan. 16-Feb. 1 at the UNT on the Square Gallery in Denton, TX.