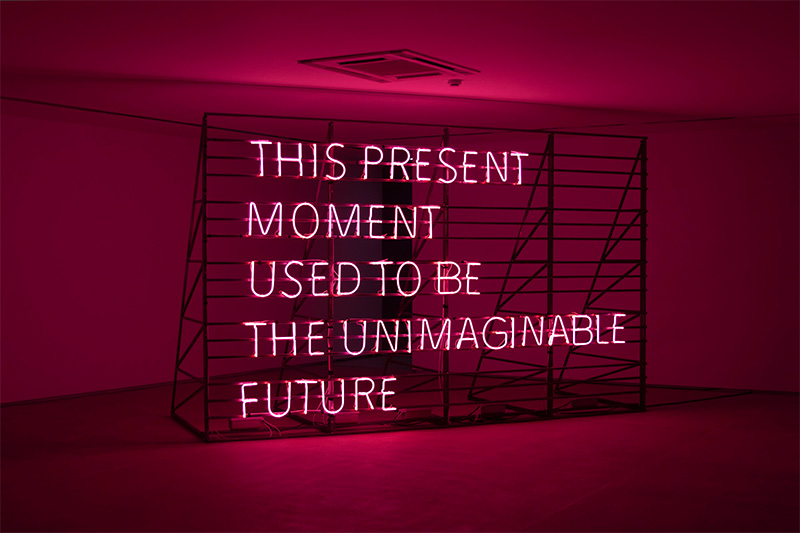 Alicia Eggert, This Present Moment. Photo courtesy of the artist.

The Dallas-based artist Alicia Eggert, along with collaborator James Akers, recently opened a captivating new work at Houston’s Color Factory, a pop-up space that focuses on “instagrammable,” site-specific installations. The work is constructed of 333 individual warm and cool white lights. When two viewers each place a single hand on an electric sensor and then hold hands with one another “creating a human bridge,” the electrical current that flows through their bodies causes the installation to light up in brilliant block letters that read YOU ARE MAGIC. Music plays. According to Eggert, the algorithm is such that “it doesn’t happen the same way” for any pair of viewers. This participatory installation borrows on “the magic of the fact that electricity can flow through our bodies,” she explains, which allows viewers “to do something that you couldn’t do by yourself.” 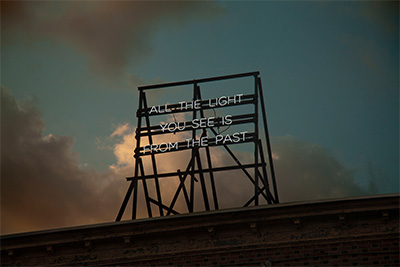 Alicia Eggert. All the Light You See. Photo by Ryan Strand Greenberg.

Perhaps Eggert’s finest skill as an artist is locating the “magic” in everyday things. Words and phrases are her primary material. She renders them in physical form, giving seemingly simplistic ideas literal weight, depth and height.

“I associate myself with conceptual artists and that history,” she explains, but her works are firmly rooted in the physical world. “I think also about the way words are objects. Other sculptors will take a found object and present it back; one of the reasons why I use language is because it is so puzzling to me.”

The act of turning words into forms presents the possibility of new readings and surprising encounters. “As you move your body around in time and space the word changes.” The essentially abstract forms of the letters can begin to break down as you stare at them, losing meaning as they devolve into shapes. Additionally, the word’s meaning can change depending on the sculpture’s environmental conditions. 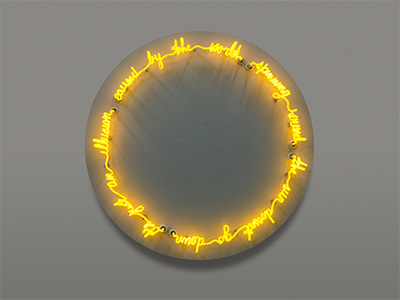 Alicia Eggert, The Sun. Photo courtesy of the artist.

“One word is worth a thousand images,” Eggert says, and it sounds like a mantra. Recently the artist has been making international forays, completing a residency in Porto, Portugal through the Galeria Fernando Santos. A neon sign reading ALL THE LIGHT YOU SEE IS FROM THE PAST was purchased by the Amsterdam Light Festival and will tour around Europe. But Eggert has little interest in making other languages part of her source material. “I couldn’t go there without making some horrible mistake,” she admits.

Like many artists, Eggert’s process begins with notebooks, usually filled with collections of words or phrases that strike her as “clever or playful.” She laughs, “I feel like my sketchbooks aren’t very pretty.” Not intended as art objects themselves, these notebooks simply involve “putting words on the page in different configurations.” She rejects the kind of “self-consciousness” that involves making beautiful preparatory drawings and instead just focuses on things that she finds interesting. Another notion she shrugs off is that artists should think in strictly archival terms, or try to imagine their artistic legacy as such. 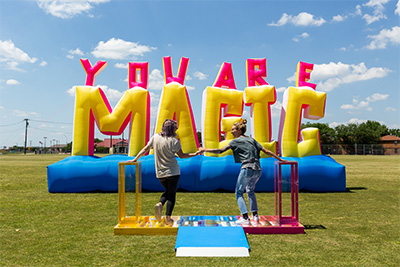 “I wanted to push back against that idea that a work of art lasts forever,” she explains. Pulse Machine, a piece from 2012, involves a kick drum and a clock that counts down the average number of heartbeats a person born in that year will have in a lifetime. The piece, just like the human that created it, has a lifespan. “All we can do as artists is make the initial thing,” she states. “Matter is ephemeral.”

As much as Eggert actively subverts notions of legacy, she may end up with a substantial one in spite of herself. A neon sign she erected in Philadelphia, which “started as a temporary artwork” has been purchased as a permanent public piece. Add to this her work as an educator (Eggert won the Presidential Early Career Professorship Award from the University of North Texas, where she teaches sculpture) and it would seem that the ripple effects have already begun. “I like to keep my finger on the pulse of the younger generation of artists and what their interests are,” she admits. “I feel my role as a teacher is really symbiotic.” In March of 2020, her works will join those of Robert Irwin and James Turrell in an exhibition titled Bright Golden Haze at the Oklahoma Contemporary.

But Eggert’s work clearly isn’t about legacy-making. She draws us into a well-lit present, “getting everyone in the space to actively participate in making something,” by activating one of her works, or by reminding us, as in a 2019 piece, that “THIS PRESENT MOMENT USED TO BE THE UNIMAGINED FUTURE.”