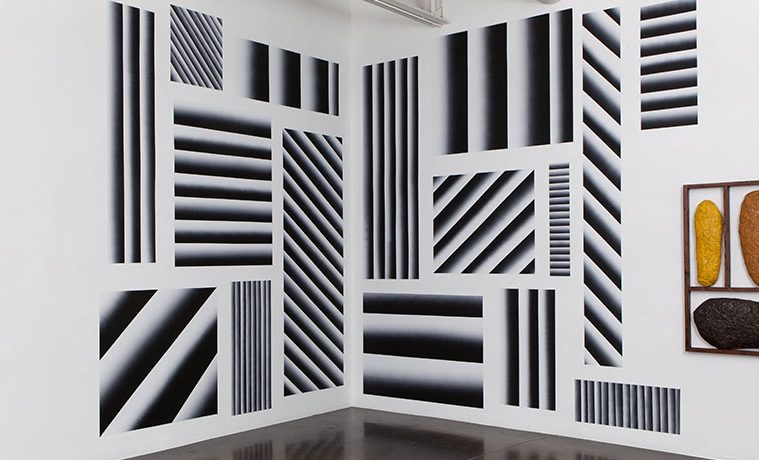 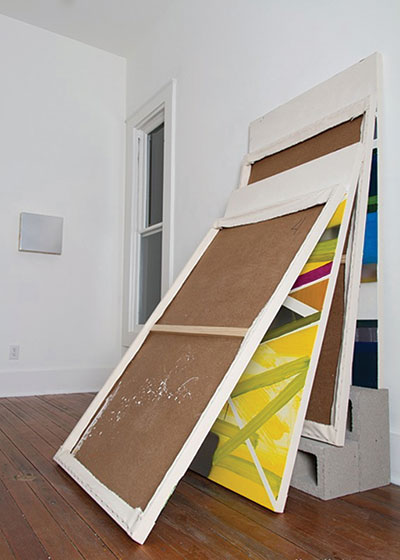 Irony has been the standard currency of avant-garde art for so long now—50 years or even a century depending on how one looks at it—that it is simply grammatical. It is the language by which beginners articulate their first artistic ideas, and if an artist gets stuck there, it is the equivalent of having the verbal skills of an 18-month-old for life.

Distinct from this, Eli Walker, Joshua Von Ammon and Nathan Green are three Dallas painters bent on sincerity. Their practice is what I would like to call “post-ironic.” They have nothing to hide about not simply crafting form or, more precisely, the formalism of their work.

Stereotypically, formalism in art prioritizes beautiful form while forsaking big ideas. This tends to be a weakness in Dallas, a city with a notable penchant for beautiful objects shorn of intellectual substance or context.

Such is not the case with this group. They intrigue with their ideas and knowledge of the history of art criticism and art. The initial lure might be the surfaces and structures of their work, but the sitting-and-staying unfolds around penetrating talk. What does it mean, for example, to be forced to choose “between the ideas of Clement Greenberg and Poststructuralist theory?” This was the brilliant and effervescent aside directed at me one drunken evening at the Gould-Street compound, the home, studio, and gallery Walker and artist Kelly Kroener cheekily named Homeland Security (never mind the irony here).

Clement Greenberg was the most famous critic and champion of mid-20th-century gestural abstraction. Think here of the bravura brushstrokes and giant, heroic canvases of Mark Rothko, Jackson Pollock, and Barnett Newman. For Greenberg, the non-objectivity of their canvases, i.e. absence of figural representation, signified autonomy of medium. This is to say, abstract painting was untouched by the burdens of politics that go along with literal representation or commodification with advertising. On the one end, Greenberg’s ideas were formed by totalitarian art, that is, 1930s propaganda from the Third Reich and Soviet Union, and regionalist painting in the United States. On the other end of that half-century was pop art—which, because of its rambunctious references to cartoons, advertising logos, and everyday life, Greenberg found equally abhorrent.

Post-structuralist theory, on the other hand, views everything as embedded structures. Informed by the student riots of 1968, post-structuralists preached that there is no autonomy of art form or culture, since everything emerges by way of structural relationships and, more precisely, as a matter of language. A work of art is always already called into its position within, rather than being above, autonomous from, or without socio-political constraints. 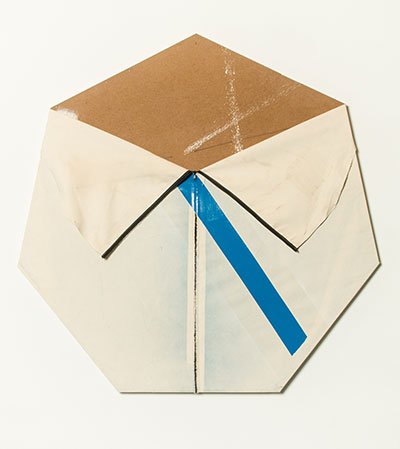 Walker, Von Ammon, and Green are indeed ruminative and well read, though not necessarily steeped in theory. Post-ironic painting is smart, and their work is doubtlessly smart, but casual about its ties to these old saws. To be more precise, their work strikes a new autonomy that is sincere and concerned with being physically present as three-dimensional form.

So, to repeat the logic of contemporary autonomous painting in Dallas: if autonomy for Greenberg meant painting untouched by the weight of conveying meaning through figural representation, autonomy now in our city means the absence of irony and cynicism. Autonomous painting does not wink or nudge as if to replay for the umpteenth time hyper-reality and the attendant end of originality. It is beyond hacky postmodernism, having metabolized it along with conceptualism in order to move outside of the endless reheating of Duchamp a century after his highjinks changed the art world.

Walker and Von Ammon explain their approach to painting in terms of lineage. Walker’s self-identified art parents are the painters Gaylen Gerber and Robert Ryman. Von Ammon’s are Frank Stella and Josef Albers. All four  are formalists—painters concerned with painting as an object fabricated out of physical materials. Like these forebears,  the formalism of Walker, Von Ammon, and Green has loose ends, which means, unlike Greenberg’s restricted sense of medium-specificity, a painting is fundamentally a structure with a surface. It can thus be a canvas, wall, or hung surface, anything sewn like fabric or congealed like a plastic shower curtain.

The work in Von Ammon’s solo show at Circuit 12 Contemporary, Tears for Fears, investigates relationships between painting and wall, as well as painting as wall. The name of the show pays homage not simply to the British 80’s pop band, but at a deeper level to psychotherapist Arthur Janov’s primal therapy, for which the show was named. This connects, if only through language, Von Ammon’s abstraction to trauma-based therapy and the artist’s education in criminal psychology. In its physical presence, Von Ammon’s work feels less about the deep well of human psychology and more about the physical possibility of painting.

Octagreen is a small five-sided painting that hangs on an unfinished wall at the back of the gallery. There, stretches of patched up drywall hang intermittently on bear shiny metal beams. Green Pastures hangs in a recess adjacent to Von Ammon’s Octagreen. A small collaborative painting made by Von Ammon and Kroener with grip tape, green dyed canvas, and enamel on panel, it is embedded within the open construction.

Von Ammon’s work seems to reference the three-dimensional experiments in painting and drawing by Jessica Stockholder and Gordon Matta-Clark. But Von Ammon, like Walker, cites Dallas painter Nathan Green as an influence, in particular his DIY spirit. 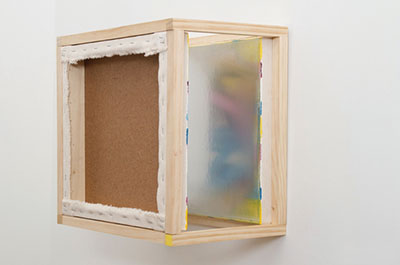 When pressed about his art parentage, Green thwarts the genetic law of two parents in favor of a zygote made by multiplicity, explaining that his “work is more schizophrenic than that.” He capitulates, narrowing parentage to three: art history, Home Depot, and Hobby Lobby. Green is a fearless painter who has been known to incorporate a motley mix into his palette, including pizza and, most recently, Great Stuff Foam, spray-on insulation froth with which he dots his canvases, making a surface of snake-like squiggly forms. This body of paintings, along with an open-structure piece partially inspired by Louise Nevelson, was part of Feature, a new, ongoing exhibition series at The Goss-Michael Foundation, of which Green was the inaugural artist.

A founding member and seven-year veteran of the Okay Mountain artists’ collective in Austin, Green is interested in collapsing three- and four-dimensional realities—think of architecture and our movement through it—into something large and two-dimensional. Ultimately they are hung on the wall while, at the same time, not abdicating any of the experiential registers of architecture and its experience. This tenuous combination makes for lively mash-ups of craggy and voluptuous order, paintings that are suggestive of sculpture and equal parts childlike in terms of tactility while somehow of quantum physics. Green’s work will be in a show at Hus Gallery in London later this summer.

Walker, Von Ammon, and Green are alert with the fresh energies of an old way of making painting—by way of sincerity. They look to this lodestar not to go back but take us forward into the uncharted lands of charm embodied in earnestness.