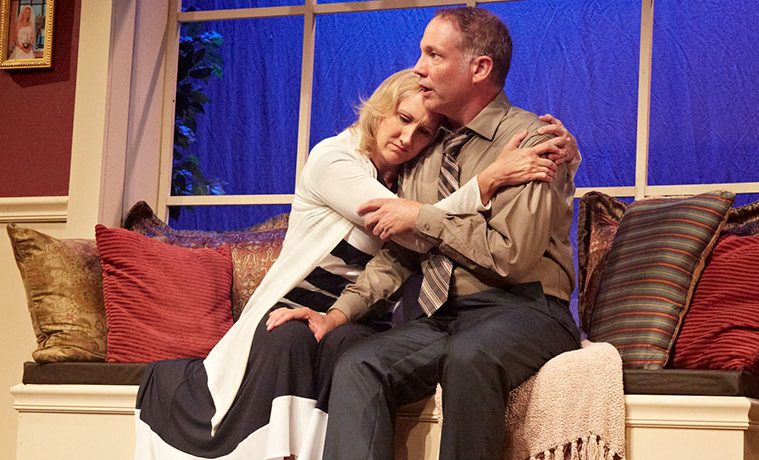 IMAGE ABOVE: Kim Tobin-Lehl and Philip Lehl in Stark Naked Theatre’s production of The God Game. Photo by Gabriella Nissen. 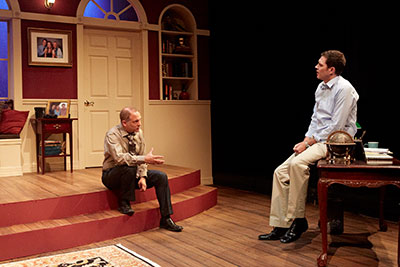 What is faith? Who has it? And is it a necessary quality for leadership? These could easily be questions that might be the basis for a philosophy or theology class. But how they work at both a human – and a political – level is what’s beautifully on display at Stark Naked Theatre’s regional premiere of Suzanne Bradbeer’s The God Game (through Sept. 20). It’s an outing well worth taking.

Tom Trevor (Justin Doran) is a Virginia senator with a bright future ahead of him in his party. He’s that rarely seen creature, a Republican who cares more about climate change and its effect on the earth and the whys of foreign policy than he does about pandering to the base. We meet Tom on the morning of his 20th wedding anniversary to his wife Lisa (Kim Tobin-Lehl), a devout Christian who’s made peace with Tom’s endless work schedule and who channels her energy to volunteering at a shelter for homeless women. For two decades this day has been sacrosanct for them: no work, no distractions, just a couple of steaks on the grill, an interesting Burgundy and a cake that Lisa’s baked.

All that gets blown to smithereens when Matthew (Philip Lehl), their longtime friend and a political operative for Steve Jenkins, the governor and the Republican presidential nominee, turns up in their townhouse (a set lovingly rendered by Jodi Bobrovsky) with the offer of a lifetime for Tom: be Jenkins’ running mate. Forget that the two are far apart on climate change and foreign affairs. Tom will be useful to the campaign. He’s got a huge approval rating, he’s happily married, he’s a believer. Wait. Is he? 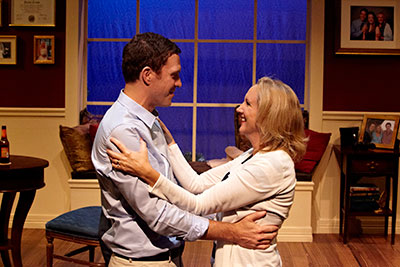 Well, maybe not. And therein we’re treated to two hours of the kind of intelligent, mostly respectful, even discourse about just how much belief matters and what having it (or not) makes a person. Matt tells Tom his waffling on belief is no big deal; pander a little bit, he advises, a little scripture verse here, a mention of Jesus there, piece of cake. Not so fast. Lisa’s faith is absolute. She doesn’t much mind that Tom’s isn’t, although she does want him to go to church with her. But lying about it just as bad as working on their anniversary, possibly worse.

What’s a politician to do? The answer, and the way this trio navigates their own histories and their opposing needs is what makes this an interesting evening. It’s a talky play, and the relationships in it perfectly exemplify the “real theatre” Stark Naked aims to produce. These are real emotions, real needs, and very real people. Doran is making his debut at Stark Naked here, and he’s all charm and wit, showcasing his character’s penchant for thought and reason over emotion and shooting for the lowest common denominator. He’s so real, you might find yourself wishing there were more actual politicians like him. Tobin-Lehl serves as a lovely foil to his evenness. She spikes emotion laced with maternal instinct, while revealing a steely undertone that shows she realizes exactly how much she’s actually work in this whole scheme. Lehl brings to life Matthew’s feeling pulled between the right thing for the moment and the actual right thing, showing both his own disappointment in himself on occasion and his belief that there’s a greater good to be gained here. 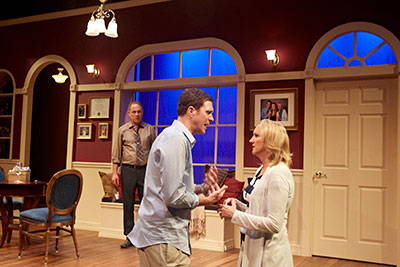 Bobrovsky’s set provides a homey backdrop for the push-and-pull of the action, and it’s augmented beautifully by Andrew Vance’s lighting. The play sometimes feels like we’re eavesdropping, and sometimes like a political science seminar, and it dips into judgmental territory on occasion, even as it strives to show how a middle way might be the only direction sometimes. It’s a little like going around in circles, with no real conclusion in sight, with an undercurrent of trying to give each opinion equal time. That’s a trifle tedious on occasion, but the actors and their timing and chemistry make up for it in spades.  Jennifer Dean directs her cast through these obstacles with a gentle hand, allowing the actors wide range to explore all the emotions at play.

This is the kind of show to see with a group of people; you’ll want to gather for drinks afterward and dissect. In fact, in an election year, it’s possibly even more important to check out The God Game, and then sit around and talk about how the political sphere touches our lives and makes us think, and where we fit into the scheme of it all. The questions about what faith is, and who has it, how we express it – and even if and when we should – are important ones. The God Game doesn’t deliver answers, necessarily, but at its heart, it’s a show to believe in.