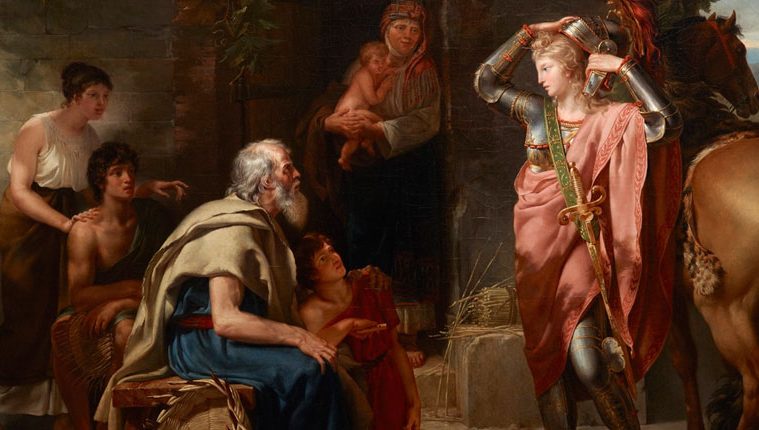 The Dallas Museum of Art has recently acquired an early work by the French painter Guillaume Guillon Lethière (1760–1832), one of the first major artists of African descent in the history of European art. The painting, Erminia and the Shepherds, was shown at the Salon of 1795 in Paris and perfectly complements the DMA’s collection of late 18th- and early 19th-century French paintings. In style, it references the neoclassicalism that dominated the last decades of the 18th century, but also anticipates the new interest in European historical subjects that would prevail in the early 19th century. It is currently on view in the Museum’s European Painting and Sculpture galleries on Level 2.

“The Dallas Museum of Art is delighted to add this work by Guillaume Guillon Lethière to the Museum’s collection. Its acquisition is made all the more significant for our global collection for it marks the earliest work of art in the DMA by an artist of color working in the Western tradition,” said Maxwell L. Anderson, The Eugene McDermott Director of the Dallas Museum of Art. “Erminia and the Shepherds is a beautiful addition to the DMA’s current holdings of European paintings from this time period.”

“Guillaume Guillon Lethière was the son the king’s chief prosecutor in Guadeloupe and an emancipated African slave, and he was a prominent figure in the history of French art, achieving the highest academic rank by the end of his career,” said Olivier Meslay, Associate Director of Curatorial Affairs and The Barbara Thomas Lemmon Curator of European Art at the Dallas Museum of Art. “His work Erminia and the Shepherds  represents the painting style prominent during the late 1700s while anticipating the romantic shift in execution and subject interest. This painting serves as an important touchstone and reference point for this key transitional moment in art history.”

The subject of Erminia and the Shepherds is drawn from Torquato Tasso’s epic poem of the Crusades, Jerusalem Delivered (Gerusalemme Liberata), published in 1581. The seventh canto tells the story of the Muslim princess Erminia, who falls in love with the Christian knight Tancred:

She rose; and gently, guided by her ear
Came where an old man on a rising ground
In the fresh shade, his white flocks feeding near,
Twin-baskets wove, and listened to the sound
Trilled by three blooming boys, who sate disporting round.

They at the shining of her silver arms,
Were seized at once with wonder and despair,
But sweet Erminia soothed their vain alarms,
Discovering her dove’s eyes, and golden hair.