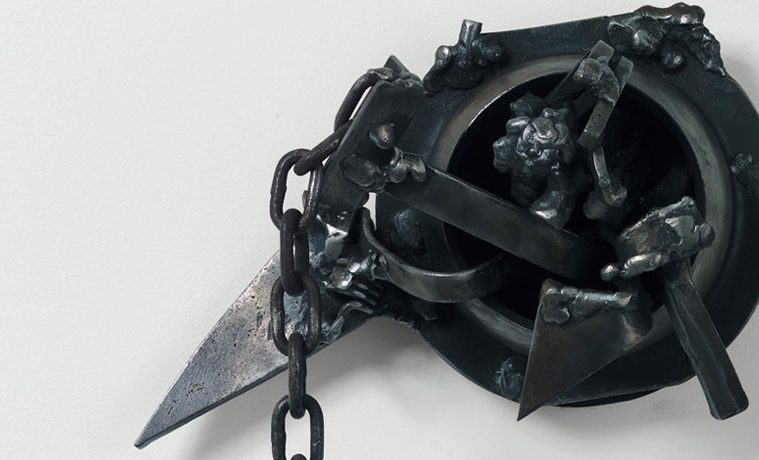 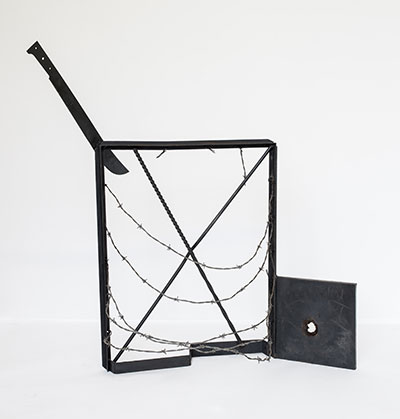 American sculptor Melvin Edwards primarily works in welded steel and is usually associated with his Lynch Fragments series of relief-like objects. The Nasher Sculpture Center has organized the first major retrospective of his large body of work in more than 20 years, bringing together not only the Lynch Fragments, but also pieces representative of his entire artistic range. This includes freestanding sculptures, rarely seen works on paper, sketchbooks, and a recreation of installation sculptures from his show in 1970 at the Whitney Museum of Art in New York.

The show was curated by Catherine Craft, the Nasher’s Associate Curator, whose meticulous research and passion are evidenced in the scholarly catalog published for the occasion, and in the placement of the pieces in the galleries. After this, the show will travel to two additional museums in New Jersey and Ohio, reaching a larger audience and adding to the authority of the Nasher as a research institution.

What comes through immediately is that a combination of his close reading and study of modern western sculpture, and the cultural and social implications of the civil rights movement in America formed Melvin Edwards. His work aesthetically engages with injustice and the plight of the poor and downtrodden both here and abroad. Edwards viewed the aftermath of the Watts riots when he lived and worked in Los Angeles during the 1960s and witnessed the continued struggle for equality upon his move to New York and in subsequent trips to Latin America and Africa, where he established a second home and studio in Senegal. This international sensibility imbues his work with a range of themes and ideas.

Edwards never witnessed anything resembling a lynching, but the historical circumstances and facts surrounding this legacy of racism were a frequent topic in discussions during the early time of the civil rights movement. His inspiration for the Lynch Fragments, abstract configurations welded together and meant to hang at eye height, composed of objects such as spikes, chains, scissors, hooks, and blades, comes directly from the tactile and emotional resonance found in the subject. Racism’s legacy informs these sculptures with themes of confinement, pain, resistance, and the fleeting connection of life to the human body. Alternately, feelings of perseverance and protection are also expressed. 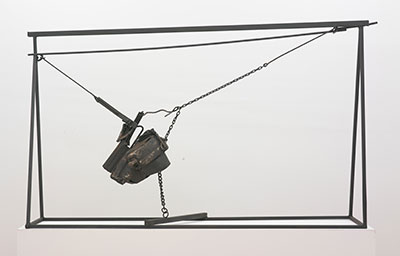 A particularly strong piece, The Lifted X (1965), sits in the center of the main gallery and meets visitors as the first sculpture they experience in the space. A welded mass of several Lynch Fragments forms a columnar shape that is supported by a rectangular framework of elements that comprise a type of base.  There is a decidedly upward thrust that the central mass communicates which was inspired by news of the assassination of Malcolm X. Edwards added bars to the base to symbolize the reference in the title, and as for the Lifted he has said “when important persons die, they rise.” This homage to the slain civil rights leader captures the loss of life and an enduring legacy within Edwards’s mastery of his sculptural vocabulary.

In the museum foyer, the curators economically placed four of Edwards’s personal expressions of respect and admiration to creative figures he met or knew of. These symbolic pieces reference Jazz musicians, visual artists (Wilfredo Lam and Norman Lewis), and the poet Pablo Neruda. Through his art Melvin Edwards placed himself in good company, and by measure of his long and continuing career he has faithfully done justice to his forebears while raising the bar for the next generation.