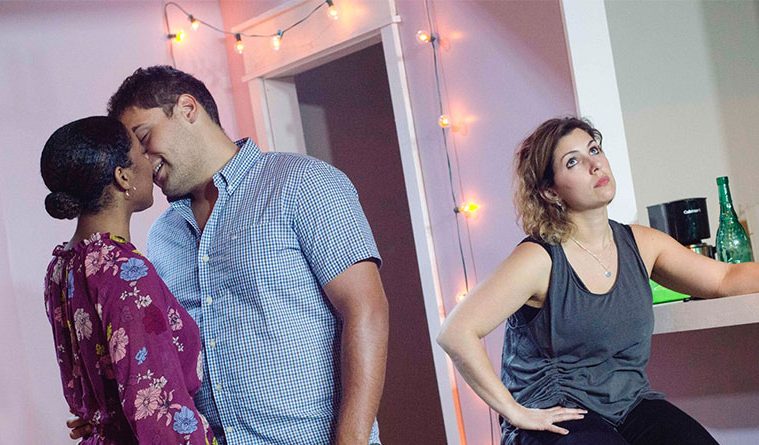 Neverland No More: Sender at the Rec Room 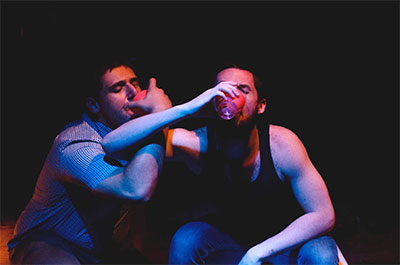 As a critic, I try to stay open to every theatrical form, genre and story to lay aside my personal preferences and tastes so that they don’t prejudice my views of any specific play and production. Yet like every human I have a few convictions that so color my perception of the world, and especially imagined worlds on stage, that the best I can do is disclose them. Therefore let the record show that I hold this truth self-evident: the beloved canonic character, Peter Pan has been and always will be an irredeemable soul-sucking demon from hell.

I confess this harden belief because I recently encountered Peter in the guise of a millennial Chicagoan, in Rec Room’s funny and poignant production of Ike Holter’s Sender, throughNov. 11. Luckily, Holter and director Josh Morrison appear to understand Peter’s ability to sow chaos and misery in his wake, and Sender’s focus stays primarily on the poor fools he seduces, drains and discards.

Sender has no magical or fairytale elements. Scenic designer Stefan Azizi’s remarkably detailed low-rent hipster set places the story in the very real 21st century world. Yet, there can be little doubt that Leonard (Jeremy Gee) who goes by Lynx (because of course he does) possess the vampire spirit of Peter Pan.

Sender begins after Lynx has returned to his girlfriend, Tess, (Stephanie Wittels Wachs) and best friend Jordan (Gabriel Regojo) a year and a day after haphazardly faking his own death. What bills, debts or relationship entanglements he tried to escape 366 days before, his friends and certainly Lynx never make entirely clear. Instead, we soon understand Lynx really ran away from adulthood, and all the responsibilities like jobs, rent and recycling that Tess and Jordan have embraced after a dark period of mourning. Now Lynx wants those who love him to follow his lead once more and head off to some imagined utopian wilderness in Neverland or Wisconsin, whichever. 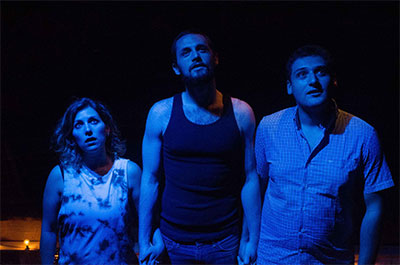 Both Wachs and Regojo inhabit the grief and conflicted relief Tess and Jordan feel at Lynx’s return. Wach laces Tess’s first reaction to a living-Lynx with righteous and rightful anger and Regojo with accepting joy. Yet as both Tess and Jordan become tempted, albeit drunkenly, by Lynx’s rooftop siren call to join him and fly away from their ordinary, grown up lives, they also lose some hard-won sympathy, mostly because it becomes difficult to imagine how Lynx beguiled them in the first place.

Yes, Gee certainly looks good in nothing but a towel and Lynx’s smirk shows glimmers of charm, but it’s still difficult to understand what exactly Tess and Jordan see in the guy. And both performances depict love for Lynx as a real person not just a symbol of a past when they partied, played and hung out without many thoughts towards the future.

Under Morrison’s direction, Gee does seem to be feeding this bewildering joke though. In one scene as Tess and Jordan sit out on her apartment stoop and reveal the complex mutual jealousy they felt for each other’s relationship with Lynx, we see this golden Pan inside the kitchen, spending several minutes engrossed in reading the side of a cereal box. 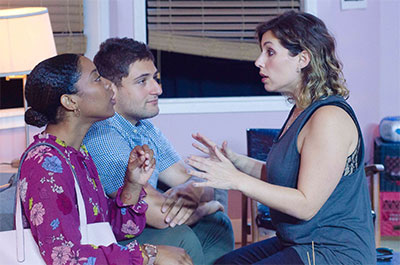 Far more fascinating is the fourth person and really the only grownup in this relationship rectangle, Jordan’s pregnant wife Cassandra (Candice D’Meza). She easily sees through all of Lynx’s bullshit. De’Meza’s gives Cass great grace and ferocity as she spends the majority of the 90 minute play picking up all the emotional (and clothing) messes Lynx has strewn about the place. Perhaps a great mystery of Sender lies with Cassandra, as here again it becomes hard to imagine why she puts up with Tess and Jordan’s devotion to Lynx. She does thrive on always being the nurturing yet stern nanny but again why she’s set on saving this particular gang of lost boys from themselves remains unanswered.

We have to wait until the end of Sender’s tale to discover who will grow up, muddling on with daily life to find occasional but real happiness, and who will continue to chase his or her own shadow of childhood. Still, any production that calls Peter Pan on all his shit is one I’ll clap my hands for and whisper: I believe.