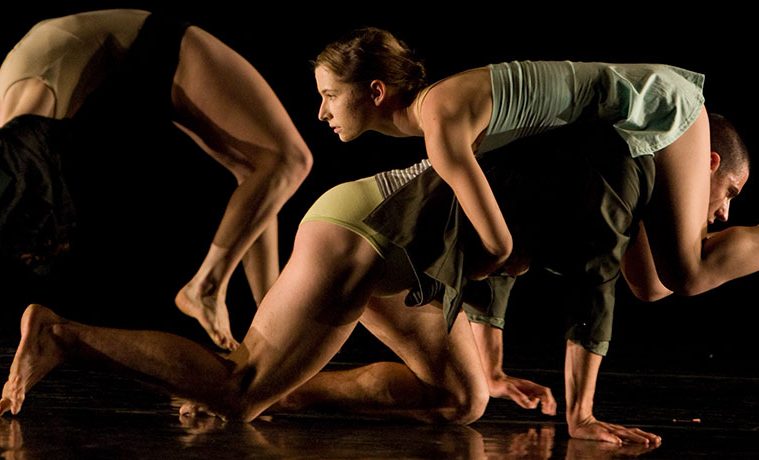 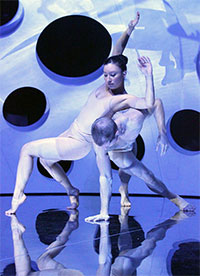 Diavolo at SPA and TITAS

HOUSTON- The Los Angeles-based daredevils Diavolo perform their latest opus, Fluid Infinities, through Society for the Performing Arts on Jan. 9 and through TITAS on March 27-28. Expect daring moves on amazing structures. “The work always starts with the structure and then I collaborate with architects, sculptors and designers to build it,” says artistic director Jacques Heim. “Then I tell my dancers, ‘It’s playtime. Go discover what the structure tells you, what kind of movement you can you perform on and around it.’”

IMAGE:  Diavolo performs Fluid Infinities through Society for the Performing Arts on Jan. 9, and through TITAS, and on March 27-28.
Photo by Alexander Slanger.

IMAGE:  Ate9 in Mouth to Mouth.  Photo by Danielle Picks.

DALLAS-Ron Brown is one of the most important choreographers working today, so when his company stops in Texas, pay attention. Dallas’ TITAS presents Ron Brown/Evidence on Jan. 17 in Come Ye, set to songs by Nina Simone and Fela Anikulapo Kuti, and On Earth Together, set to music by Stevie Wonder. Knowing Brown’s delicious hybrid vocabulary, his singular talent for probing the meaning of community and ritual, and the spectacular virtuosity of his dancers, it should be one fantastic evening of dance. TITAS executive director Charles Santos agrees: “Brown’s kinesthetically irresistible, African-based style, combined with Wonder’s infectious music, draws the audience into Evidence’s passionate and powerful performances.” 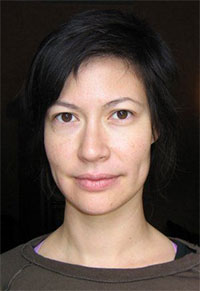 DENTON-Sola, an evening of solo dances choreographed for and by women, curated by University of South Florida assistant professor and former Austin artist Andee Scott, includes work by Amy Chavasse (MI), Tzveta Kassabova (VT), Pam Pietro (NY), Mary Williford-Shade (TX), and Bliss Kohlmyer and  Scott, Jan. 15 – 16 at Texas Woman’s University. “This project is an opportunity to bring together high caliber professional artists to not only produce an evening of stunning dance, but also to create a new model for touring dance that creatively responds to current issues of funding scarcity within the arts,” says Scott, a Texas pioneer in solo performing. 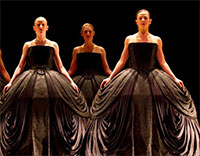 AUSTIN-Texas native and Hubbard Street Dance Chicago artistic director Glen Edgerton may have left Texas early on in his career, but the company does seem to drop by when it can. Texas Performing Arts presents Hubbard Street on Jan. 29 for an all Jiří Kylián program, which should be exciting because Hubbard Street has Kylián in their DNA.

FORT WORTH-Joshua L. Peugh, founder and artistic director of Dark Circles Contemporary Dance, continues to make big waves in Dallas and elsewhere. His winter show, Jan. 29-31, promises a new commission by Ballet Austin New American Talent finalist James Gregg. Dark Circles also performs at Dancers Give Back Dallas in January, and at TCU’s Aids Benefit Concert in February. Peugh’s new work for the Los Angeles-based BodyTraffic premieres at the Joyce in New York City on Jan. 6. Closer to home, he will create a new work for his alma mater, Southern Methodist University, this Spring. “I encourage my dancers to trust understatement,” says Peugh. “When work is more sensitive, the audience is more likely to insert themselves in the fantasies we’re creating; they are more likely to get lost in the work.” 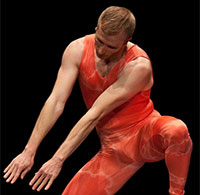 Jérôme Bel at the CAMH

HOUSTON-The CAMH presents Jérôme Bel’s Cedric Andrieux (2009) on Jan. 30 & 31, as part of  the exhibit Double Life through March 13.In Bel’s Cedric Andrieux, the longtime dancer with Merce Cunningham and Lyon Opera Ballet reveals the pain, beauty and heartbreak of a life on stage. The fact that his own body and life form the “object” of the work connects to the idea of duality. Bel’s 2004 poignant portrait of the Paris Opera ballerina Veronique Doisneau will also be on view. 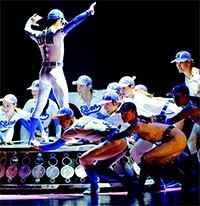 HOUSTON-It was only a matter of time before someone created an Elton John ballet, and now Alberta Ballet’s production of Jean Grand-Maître’s Love Lies Bleeding, comes to Houston on Jan. 30 & 31 thanks to Houston Ballet’s Cullen Series. “Love Lies Bleeding is a work that’s thrilling to watch, and it beautifully captures the magic of Sir Elton John’s music,” said Santon Welch in Houston Ballet News. Expect some flash, sequins and overall wildness, including a roller-skating Rocket Man. The performance is part of a unique exchange between Houston Ballet and Alberta Ballet. Houston Ballet heads to Alberta to perform Welch’s La Bayadere on April 30-May 9. 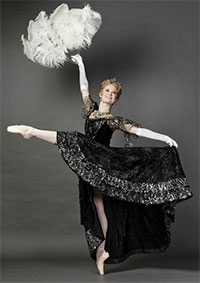 FORT WORTH- Champagne goes so nicely with ballet, which is exactly what you will find combined in the right proportions in Ronald Hynd’s frothy ballet, The Merry Widow, Feb. 6-8 at Texas Ballet Theater. This charming confection has everything you need to chase the February blues away: love, money, fancy chandeliers and loads of the bubbly.

SAN ANTONIO-Ballet San Antonio takes on Ben Stevenson’s moving version of Romeo and Juliet,  Feb. 13 – 15 at Tobin Center for the Performing Arts, and just in time for Valentine’s Day weekend. I have seen Stevenson’s ballet many times, and love his sweeping pas de deux. It’s great to see this upstart company take on big challenges.

Belle Redux /A Tale of Beauty & The Beast at Ballet Austin

AUSTIN- Ballet Austin presents Stephen Mills’ Belle Redux / A Tale of Beauty & The Beast, Feb. 13-15, a 3M Innovation Commission with an original score by Austin legend Graham Reynolds. Inspired by the 1746 original fairy tale of Beauty and the Beast and Jean Cocteau’s 1946 ground-breaking film, Belle Redux is bound to be an exciting re-imagining.

IMAGE:  Preliminary renderings for the set of Belle Redux / A Tale of Beauty and the Beast, designed by Michael Raiford. 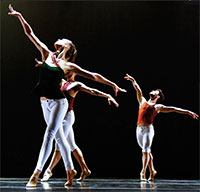 HOUSTON-SPA presents Complexions Contemporary Ballet, directed by Dwight Rhoden and Desmond Richardson, on Feb. 20, with Innervisions, an upbeat, modern dance tribute to the music of Stevie Wonder. If you are new to contemporary dance, this may be just the ticket. 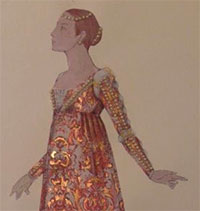 HOUSTON-I imagine Stanton Welch’s new Romeo and Juliet has been brewing since the prolific choreographer first heard Prokofiev’s delicious score. Houston Ballet reveals their first new production of Romeo and Juliet in 18 years on Feb. 26 – March 7, and it’s bound to have all the characteristics of Welch’s other story ballets, dancing roles for all the characters, serious action for the men, and a pace for today’s ballet audiences. He has gone back to the text for guidance, so expect a more true to the Bard tale.