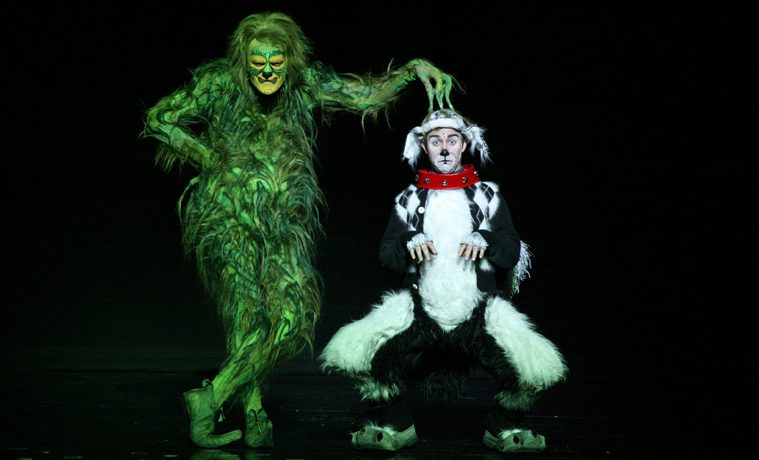 IMAGE ABOVE:   Stefan Karl as the Grinch and Andreas Wyder as Young Max in Dr. Seuss’ How the Grinch Stole Christmas running at Bass Hall in Fort Worth through Nov. 24. Photo by paparazzibyappointment.com.

The holidays are no excuse to slow down your art-going, especially since this season seems to have a bounty of new productions, along with the old standards. Be on the lookout for new takes on those old standards, too. Elves, reindeer, and dancing snowflakes are just the thing to get you out of those pesky holidays blues. Plus, they get the family out of the house. Here’s a taste of  what’s happening on Texas’ holiday stages; please know that it’s just the tip of the holiday theater iceberg. 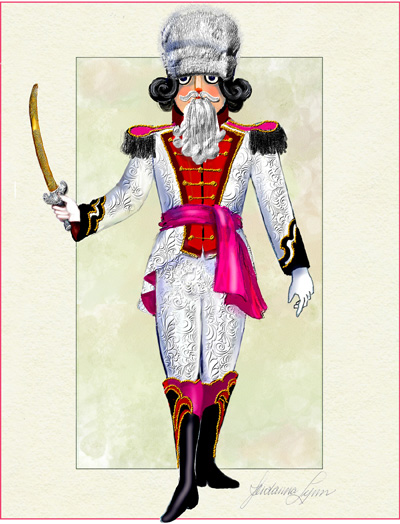 Let it be said that the best dressed Rat King lives in Austin. Everyone loves a new Nut, and Ballet Austin is coming through with that in flying colors, with gorgeous new sets by Holly Highfill, and costumes by Judanna Lynn, all of which harken back to E.T.A. Hoffmann’s world of the 1800s. Of course, the Austin Symphony will be playing live. You can continue on your holiday musical journey with the Austin Symphony at Messiah on Dec. 3, and a Christmas Sing-along on Dec. 10. 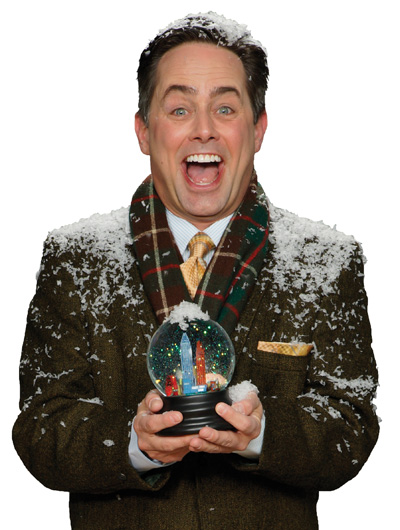 Martin Burke in the ZACH Theatre production of This Wonderful Life. Photo by Kirk Tuck.

Why go into a couch-coma watching those classic Holiday movies when you can see them live? The Zach Theatre gives us A Christmas Story, Nov. 27-Dec. 29, and Martin Burke playing all 37 characters in This Wonderful Life, Nov. 21- Dec. 29. At the Penfold Theatre Co. In Round Rock, you can find yet another variation of the timeless classic in It’s a Wonderful Life—a Live Radio Show, Dec. 5-22. Wait, there’s more at the Zach with Holiday Heroes, December 7 and 14 on their Kleberg Stage. The fun holiday sing-along show, created by Shaun Wainwright-Branigan and Jerome Schoolar, follows the adventures of Earnie and Rufus during a raucous mix-up of Christmas, Hanukah and Kwanzaa.

Imagine Christopher Durang having his way with Dickens’ classic Christmas tale, and you get Bob Cratchit’s Wild Christmas Binge, Dec. 6-29 at Sam Bass Theatre in Round Rock. 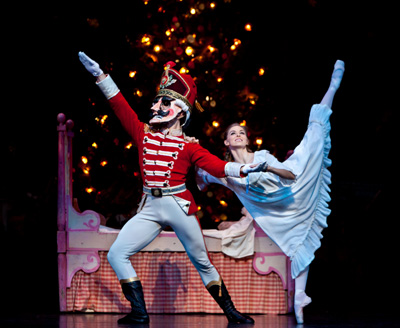 Allison Miller in the Houston Ballet production of Ben Stevenson’s The Nutcracker. Photo by Amitava Sarkar. 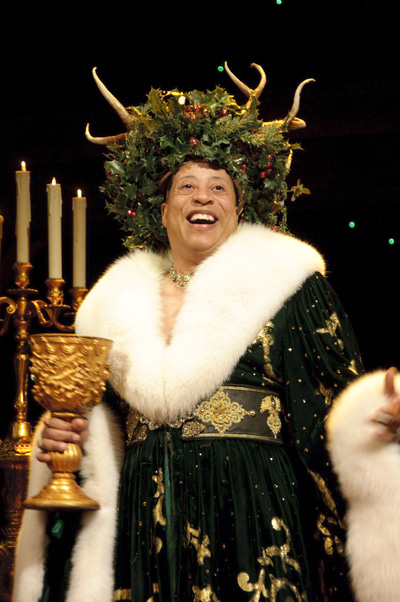 David Rainey as Spirit of Christmas Present in the Alley Theatre’s A Christmas Carol – A Ghost Story of Christmas. Photo by Mike McCormick.

Last season, we thought that Todd Waite’s turn in David Sedaris’ The Santaland Diaries at the Alley Theatre was coming to a close, but lo and behold, it’s back, Nov. 29-Dec. 31. The talented actor gets one last go at the one-man tour de force. It’s short and super funny. Beware; people go every year, so sometimes the audience laughs before the joke. Also at the Alley is the perennial classic, A Christmas Carol: A Ghost Story About Christmas, through Dec. 31. I’d like to imagine that this would be mandatory viewing for all Wall Street barons. (The twins, Greed and Innocence, still give me chills.)

Enough with the standards—what about fresh from the factory Holiday plays? Houston has them! Stages Repertory Theatre offers two: The Great American Trailer Park Christmas Musical stars Houston standout performers Ivy Castle, Suzan Koozin and Carolyn Johnson. It’s a hoot, and full of really questionable decorating ideas. No Stages holiday is complete without a fresh Panto. This year, it’s Goldilocks, featuring my Buffalo brother James Cichocki as the villain. Be prepared to boo, hiss and generally pretend you are a noisy Brit at the Old Vic.

Unity Theater in Brenham offers the holiday-ization of Nunsense with Nutcrackers, the Nunsense Christmas Musical, Dec. 5-22.

Houston’s historic Ensemble Theatre premieres the musical fairytale, Djembe and the Forest of Christmas Forgotten, with book, music & lyrics by Carlton Leake, and directed and choreographed by Patdro Harris, through Dec. 22. 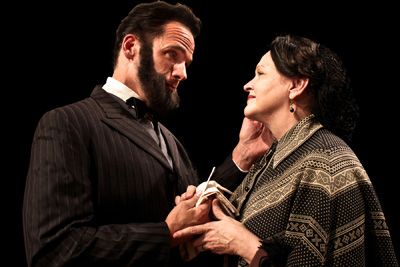 Why not enjoy the Holidays with President Lincoln and his first lady? Main Street Theater boasts a regional premiere as well in Paula Vogel’s period piece, A Civil War Christmas—An American Musical Celebration, Nov. 29-Dec. 22, while the little ones can enjoy The Best Christmas Pageant Ever through Dec. 21.

More movies turning into musicals are going down at Theatre Under the Stars with Elf, the tale of Buddy, a young orphan who mistakenly crawls into Santa’s bag of gifts landing him in the North Pole, Dec. 6-22, at the Hobby Center. A.D. Players offers family fun in Gold, Frankincense, Christmas Tree Ornaments and Myrrh through Dec. 29.

They always do things a bit differently over at Catastrophic Theatre, where Wallace Shawn’s biting portrait of an unraveling marriage, Marie and Bruce, runs through Dec. 14; you’ll have to wait till summer to see A Very Tamarie Cooper Christmas. 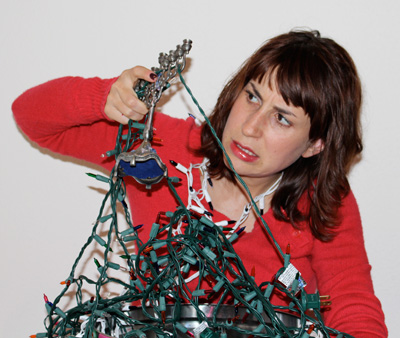 Abby Koenig in The Jew Who Loves Christmas, a multi-media installation and storytelling event at Fresh Arts through Dec.
Photo by Rob Murphy.

A+ C’s very own Abby Koenig has created The Jew Who Loves Christmas, a multi-media installation and storytelling event, Dec.6-Jan.3, at Fresh Arts. 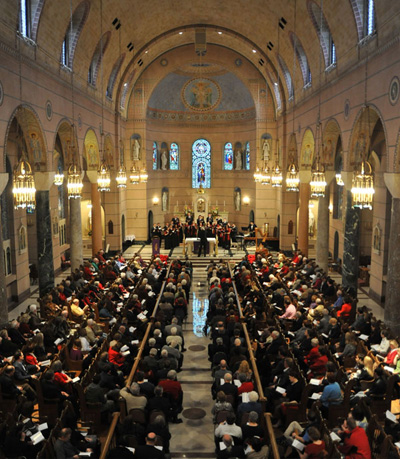 Houston Chamber Choir in Christmas at the Villa. Photo by Jeff Grass Photography.

Houston has it going on in the way of music, too. Houston Chamber Choir present Handel’s Messiah with the River Oaks Chamber Orchestra, Dec. 7 at The Church of St. John the Divine. Fill your Christmas cheer tank some more with Houston Chamber Choir’s ever-popular and usually sold-out “Christmas at the Villa,” Dec. 14-15, at The Chapel of the Villa de Matel—a simply magical venue for a concert.

Houston Symphony has something for just about every member of the family  with the Holiday Community Concert at The Methodist Hospital, Dec. 6, 10, and 11; The Holly Jolly Symphony on Dec. 12; A Very Merry Pops on Dec. 13-15; How the Grinch Stole Christmas on Dec. 14; and Handel’s Messiah on Dec. 19-22.

Just back from their Carnegie Hall debut, WindSync returns to town for Winter Wonderland, featuring Tchaikovsky’s The Nutcracker, with original choreography, costumes, and special guest harpist, Meghan Caulkett as the Rat King.

Thanks to Reliant, the Big D is doing it up big this year with a new extravaganza on Dec. 6 at the AT&T Performing Arts Center, with 250,000 dazzling LED lights, fireworks and a live performance by country music star Jack Ingram. Santa will be on hand for photos, along with fun activities for the kids, animals from the Dallas Zoo, and a winter wonderland with promising real snow! 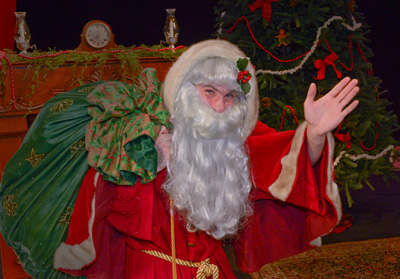 Ryan Page as St. Nicholas in the Dallas Children’s Theater production of ‘Twas The Night Before Christmas. Photo by Karen Almond.

There’s more to the holidays than waiting in line at the mall to sit on Santa’s lap. Dallas Children’s Theater presents the North Texas premiere of  ‘Twas the Night Before Christmas, a new holiday musical based on Clement C. Moore’s popular Christmas poem, Nov. 22-Dec. 22, or go to Creative Arts Theatre & School  Aesop’s Fable-ous Christmas Tree, Dec.  6- 14, at Mosaic in Arlington. 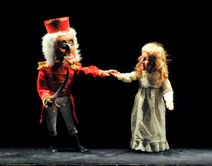 DCT also presents Kathy Burks Theatre of Puppetry Arts in The Nutcracker, adapted for the stage by B. Wolf, Nov. 29- Dec. 22, at Rosewood Center for Family Arts.

Irving Berlin wrote the best song about snow on the planet, and I can say that because I’m from Buffalo. Dallas Summer Musicals presents Berlin’s classic White Christmas, Dec. 17-29 at Music Hall at Fair Park.

Rudolph is right up there with Santa when it comes to Holiday icons, so take the tots to see Rudolph the Red Nose Reindeer: The Musical at the Majestic Theater in AT&T Performing Arts Center, through Dec. 29. This show has been adapted from the animated television special and contains all those nostalgic songs.

The Kenny G Holiday Show with the Dallas Pops on Dec. 23 will be ideal for fans of the Grammy Award-winning saxophonist.

Kevin Moriarty of Dallas Theater Center gives A Christmas Carol a make- over at the Wyly Theatre with an all-new production, featuring all kinds of theatrical bells and whistles, Nov. 22-Dec. 24. Head to Pocket Sandwich Theatre for the musical version with Ebenezer Scrooge, Nov. 29-Dec. 22.

Fort Worth has its own Holiday hoopla. Fort Worth Symphony Orchestra presents Home for the Holidays, Nov. 30 Dec. 1 at Bass Performance Hall and Handel’s Messiah on Dec.3. Jubilation: The Christmas Musical with Tre Garrett and Geno Young, Dec. 6-29,  Jubilee Theatre in Fort Worth.  Dr. Seuss’ How the Grinch stole Christmas—the Musical, is presented by Performing Arts Fort Worth at Bass Performance Hall through Nov 24 . Casa Mañana Theatre presents Frosty the Snowman, with music and lyrics by Steve Nelson and Jack Rollins, Nov. 29-Dec 22.

Holiday events spread beyond Dallas and Fort Worth too.  Plaza Theatre Company in Cleburne offers White Christmas, the musical based on the classic film through Dec. 23. Sherman Community Players presents Forever Plaid: Plaid Tidings, Stuart Ross’s holiday version of his long-running play, Dec. 6 -22, Finley Theater. Runway Theatre in Grapevine presents  Christmas Belles by Jessie Jones, Nicholas Hope and Jamie Wooten Dec. 6 -22. Can we really call it a holiday without a little side of Jason Williams and Joe Sears? Theatre Arlington presents A Tuna Christmas, Dec. 6-Dec. 22. Look for another Dickensonian variation in The Trial of Ebenezer Scrooge, through Dec.  21, at The Core Theatre in Richardson.

Why have one holiday drama when you can have two? WaterTower Theatre at the Addison Theatre Center presents the regional premiere of  Ken Ludwig’s hilarious The Game’s Afoot (or Holmes for the Holidays), Dec. 13 – Jan. 5, and The Santaland Diaries, Dec. 13 – 29.

Surely Scrooge wants to sing about hoarding all his money, and he will in the Juliette Productions performance of Scrooge: The Stingiest Man in Town, Dec. 20-22, at The Josephine Theatre.

There’s more “you’ll shoot your eye out, kid” fun going on at Woodlawn Theatre with the Texas premiere of  A Christmas Story: The Musical on Nov. 29-Dec. 29. 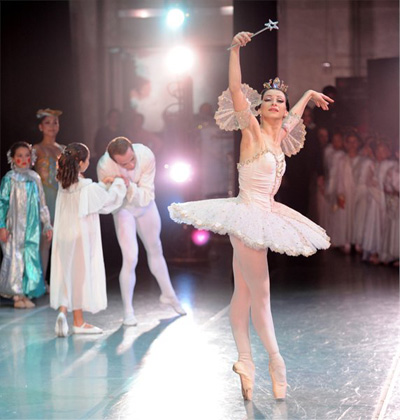