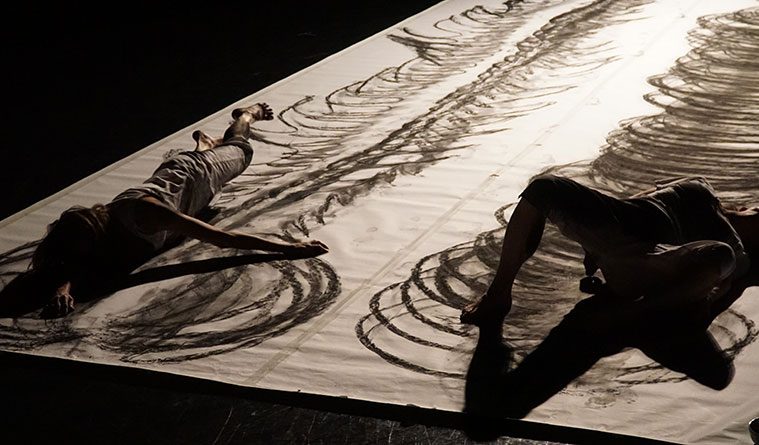 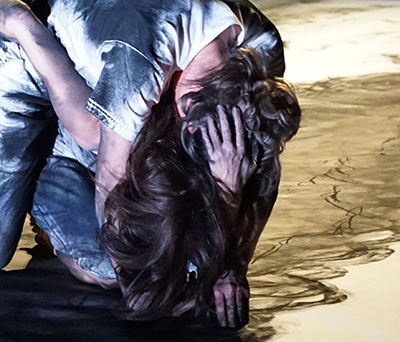 Marfa has long been a West Texas outpost for the forefront of dance improvisation choreography thanks to the brain trust of Lower Left Performance Collective, a far flung group that gathers in Europe, New York and Marfa to present their original brand of dancemaking. The collective is known for their ability to source combined artistic vitality of its artists rather than the hierarchy of the traditional dance company. They have a show coming up this Summer, a destination dance event, if you will, that will be worth the trek to see. Marfa Live Arts presents Lower Left Performance Collective in Secondary Surface Rendered on Aug. 14-15 at the Crowley Theater in Marfa.

Informed by the far west Texas landscapes, geological time and human kinetic processes, Secondary Surface Rendered is a performance installation, which allows the audience freedom to act as their own curators as they view the performance. Members of Lower Left who will be performing include Margaret Paek (New York), Kelly Dalrymple-Wass and Andrew Wass (Berlin), Nina Martin (Marfa) and Leslie Scates (Houston). The Texas-based Lower Lefters Scates and Martin visited with A + C editor in chief Nancy Wozny about the Marfa shows.

I like the idea of a destination dance event. How did this project come about?

Leslie Scates: I met Lower Left in Marfa in 2006. I went out from Houston in search of training for dance performance and dance making that I was not able to find at home. What I found in Marfa, and in the artists and ethos of Lower Left reset my body, my thought processes and my creative work… and continues to do so.  The project came about because we are deepening our investigations into performance and dance making, rather than focusing more heavily on teaching the work to others.

Nina Martin: Lower Left often has an international group of artists working in Marfa in their March 2 Marfa performance labs. This summer we decided to concentrate purely on our own performance work and send invites to our audience far and wide to join us in Marfa. 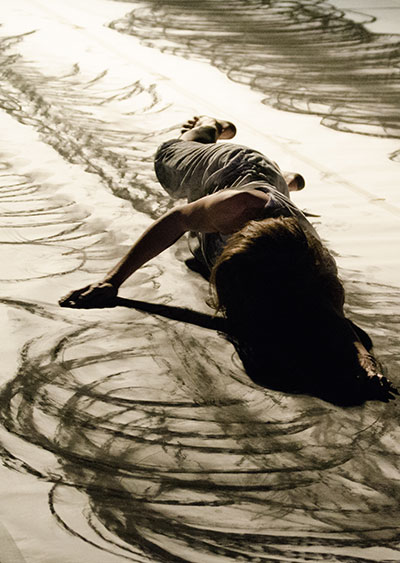 In Secondary Surface Rendered  you mentioned that the choreography is informed by West Texas landscapes? Tell me more.

NM: I feel that working with durational concepts of time, which are so obvious in the geologic record of the Big Bend area of Texas, helps anchor me in a performance discipline, which allows the viewer to enter into our work rather than to receive a broadcast of it. Essentially, the notion or concept of performance is in question for Lower Left in this performance. Adrenaline as I experience it in performance is not so apparent in the desert landscape, and it is a challenge to embody an unadrenalized sensation of timelessness in a performance situation.

You also mention geological time, which moves rather slowly.

LS: Sometimes it moves very fast. Consider earthquakes and volcanic explosions.  Mountains and canyons can be formed in less than half an hour sometimes. It is a spectrum of shift and time. Some geological processes take eons, yes, but not all of them. Water is a geo process…it has lots of varying tempos. We are looking at the body as part of landscapes, and as referential agent to landscape/geo time. Working with the body in varying tempos and in varying numbers, we show time passing.

NM: Geologic time encompasses both the cataclysmic and the durational. Can the quiet time before precariously balanced boulders shift once in a millennium be considered a performance? Secondary Surface Rendered attempts to address the sensations of these different time frames within a late afternoon performance event that is precisely timed to end with the setting of sun over Marfa.

How do audiences act as their own curators during the performance?

LS: Sitting and observing from the theater seating is a choice, not a given.  Installation in that the performance occurs and evolves in multiple locations in the space, and is created in response to those spaces.

NM: Audience members act as curators as they locomote through the choreography and choose their viewpoints, which amplifies a sense of engaging in the present moment. 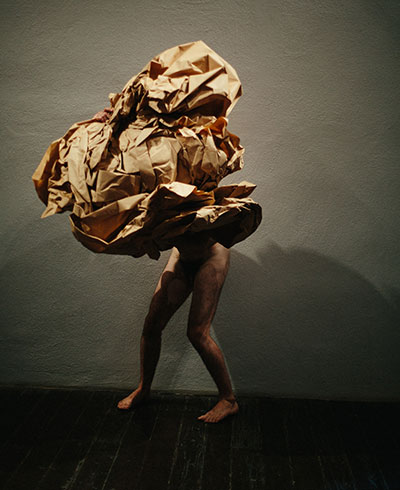 Secondary Surface Rendered  uses paper and a body based drawing process. Bring us into your thinking in using these tools.

NM: In Secondary Surface Rendered (SSR), rather than attempting to make a predetermined design on the canvas, the performer with charcoal in her hands leaves a trace of her dancing as she performs kinetic patterns. Rather than a goal of creating certain patterns on the canvass, the dance leaves the trace of its passing much like the wind leaves the trace of its passing on stone cliffs. The performers repeatedly traverse the charcoal drawings accumulating more and more charcoal dust on their white costumes. The effect is mesmerizing as the layers are added to the canvas and the dancing body. (Costumes are only good for one performance!)

LS: The movement is a repetitive pattern that involves the whole body, and is sustained from one end of paper to the other. Each pattern is different. As the movement is performed, the patterns left behind from the charcoal chunks emerge as we perform. My personal inside world is not about drawing, it is about staying in the repetition, and allowing the charcoal/drawing to be left behind. I keep taking my attention away from the charcoal and focusing in on the spine, on the repetition of movement pattern, and relaxing the hands so that the dance isn’t about creating a drawing, but about allowing the movement of the body to leave behind information. 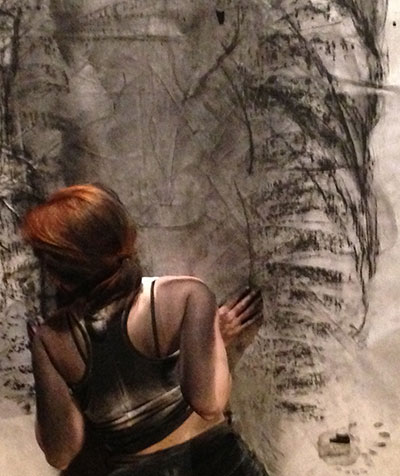 Thinking about what’s left behind brings us right back to the West Texas landscape. Marfa is a bit of a hike. Convince us to come.

NM: Marfa’s vibrant art scene and majestic landscapes makes it an international destination. A trip to Marfa in August is a welcome break from the humidity and pollution that plagues many central Texas cities. The beautiful Chihuahuan Desert surrounds Marfa at close to 5,000 feet of altitude in the Big Bend region. With low humidity, one is always comfortable in the shade during the day and nights are delightful under the darkest skies in the lower 48.  Before the invention of air-conditioning everybody that could went to west Texas to enjoy the wonderful climate. There are a lot of side trips to fill out a weekend get-away to Marfa.

LS: Journeys are about reaching the destination. Yes. Along the way, there are possibilities we do not know exist until we notice them, consider them and make a choice about whether or not we include them as experiential parts of the journey. If you don’t go, you don’t know.