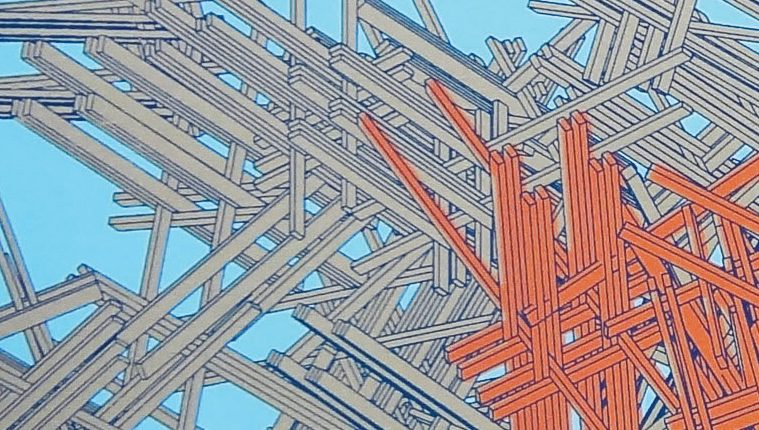 Printmaking in Houston: Then and Now

What is responsible for this recent surge of print interest within the city? Younger artists are becoming attracted to printmaking partly due to the letterpress aesthetic championed by contemporary graphic design currents, and the gritty wheat-paste poster scene is garnering attention since the recent debut of Alex Luster’s documentary, Stick ‘Em Up! However, these trends only account for part of the interest in the plethora of sophisticated processes that are conveniently bundled as “printmaking.”

Crucial to printmaking’s revival in the city is an environment that has the right blend of general interest, collaboration between artist-printmakers and artists, accessible studio space, and a market of collectors to help sustain new work. So where is this all coming from, and why are we only hearing about it now?

First, a little history lesson. American printmaking as an art form came to the forefront in the 1960s and 70s with the new Tamarind Institute, (a lithography workshop now located in Albuquerque) churning out its first graduates of highly trained and often collaborative artist-lithographers.  Universal Limited Art Editions in Long Island began attracting up-and-coming artists like Robert Rauschenberg, Jasper Johns, and others to work in a collaborative print environment — all in the fallout of abstract expressionism.

Between these two institutions and others, printmaking became much more than a means of production and suddenly had a fresh generation of artist-printmakers ready to open their own studios across the country, collaborate with one another, and seduce artists from their primary disciplines into making prints.

Folkman, a Tamarind-trained printmaker, moved his studio, Little Egypt Enterprises, from southern Illinois to Houston in the early 1970s, shortly before Manns arrived in the city.

Houston was accruing that golden combination of skilled printmakers, experimental artists, and accommodating studio space that could edition prints for collectors. A poster child for this ecosystem is Penny Cerling. She developed a penchant for intaglio processes under Manns at the Glassell and further developed Little Egypt’s etching endeavors through the 1980s before starting her own independent studio.

Printmaking blew up in the 1980s with the firm establishment of the Museum of Printing History by a coterie of letterpress printers, effectively bridging the dialogue between the printed page, graphic design, and printmaking as an art form. Little Egypt continued to boom, creating works like the Art Against AIDS portfolio in 1988, the Glassell, and other endeavors, while universities continued to educate new printmakers. Even Southern Graphics Council, the international academic pillar of printmaking, had its traveling conference at Rice University in 1985.

However, by the mid-1990s, the print scene in Houston appeared to be falling to its own inertia. Little Egypt dissolved in the early 90s, and printers generally gravitated to their own presses, yielding a more fractured, insular environment. Perhaps the average Houston art collector developed a predilection for “one of a kind” artworks, not fully recognizing the value retained in the presumed scarcity of a limited edition and the ability to represent a large amount of artists within a collection.

Over the last five years, the environment has become much more amenable for printmaking, thanks to the efforts of bootstrapping artists across the city. PrintMatters, the organization behind PrintHouston, formed as a collective-minded nonprofit composed of printmakers that promotes print processes and print collecting while working to further the professional careers of its members, who include transplants educated outside the region as well as artists trained at the Glassell and other local institutions.

Another key player in the new printmaking ecology is the fledgling studio, Burning Bones Press (BBP). Founded by former Flatbed Press master printer and current University of Houston print professor, Patrick Masterson and graphic designer turned renegade printmaker, Carlos Hernandez, BBP exists as a cooperative studio environment for many printmakers who find themselves orphaned when leaving the academic setting. BBP functions as a petri dish for printmakers in Houston – many of them PrintMatters members – but also editions prints or works in creative projects and serves as the current laboratory for the University of Houston’s new print-editioning program.

Recently, BBP produced mono-prints for the Glassell in a week-long visit with the sculptor, Albert Paley, and produced an Art Car with Dennis McNett for the Orange Show Center for Visionary Art, with more activity on the way.

The currents above just scratch the surface of Houston’s network of private presses and studios. While it’s impossible to fully glimpse the direction of the Houston arts scene, prospects are improving for printmaking. PrintMatters appears to be taking a more public direction and growing.

Other projects like the recently launched UNIT are broadening the perception of editioned works by including artist books, sculptures, and photography into the fold; all with a curatorial eye and an entrepreneurial spirit. Moving forward, the public will find printmaking hard to ignore, and perhaps the international printmaking community will find Houston harder to ignore as well.